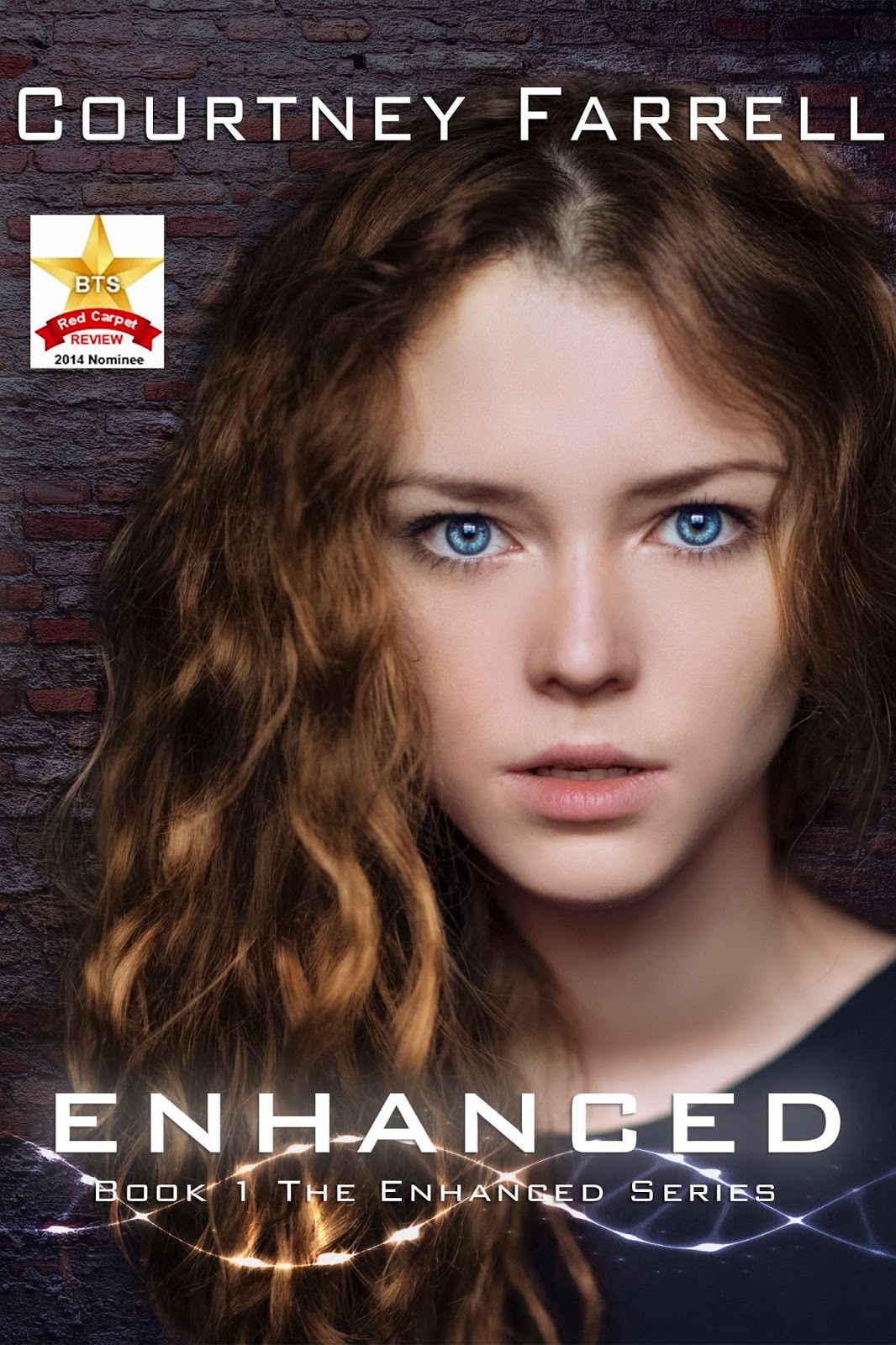 This is because Crescent Moon Press closed their doors as of yesterday. Another of my former publishing houses is having "issues" so I got my rights back for my very first book too. I'm not alone in this - there are currently a LOT of authors regaining their rights and wondering what to do next with their book babies... scary and empowering at the same time.

One of these authors is my friend Courtney Farrell, who first released ENHANCED with Crescent Moon in August 2013. I read, loved and reviewed the book then (find my original review HERE)

ENHANCED has a new look and a new publisher - and is still a great dystopian YA read. (And I absolutely love the new cover art!!!) Here's the blurb and an excerpt:

At the Institute, they breed people like livestock. One powerful doctor decides which children get to grow up, and which will die. Losers are dumped in the savage slum outside Institute walls. Those kids never come back. Sixteen-year-old Michelle is a perfect specimen, destined for a luxurious life as a breeder. When her brother and her boyfriend are both mysteriously culled from the breeding program, she jumps the wall to find them. Alone in the ghetto, she’s in trouble until handsome, streetwise Dillon stakes a claim to her. She’s mortified by her attraction to a Normal. But the doctor is using the missing boys in a twisted experiment, and she needs Dillon’s help to stop him. Michelle must rescue the boys, but a plague is spreading, the doctor is after her, and Dillon isn’t thrilled to help find her lost boyfriend.

“The game is every man for himself,” Salomon announced. “Your objective is to be the first to push the large black button on the south wall of the gym. You will be timed. Certain, eh-hmm, difficulties may impede your progress. That is all. You may begin.”


Younger boys surged forward, but stopped when they saw that none of the older ones were rushing in.

“Difficulties!” Brian reminded them, putting a hand on Nick’s chest to keep him from charging in there like an idiot. “That means a trap. There’s always a trap.”

“More than one, usually,” Seth added grimly. “These tests aren’t all physical, they test your problem-solving capacity too.”

The boys fidgeted uncertainly at the boundary, peering in but carefully staying outside the white painted line on the floor. The smallest ones looked sick with apprehension. Tests turned nasty once kids turned thirteen, and this would be their first hard one. Deaths during tests were rare, but they did happen, especially among the youngsters.

“Who wants to run in there and spring it for us?” Brian grinned. No one did. He bent to yank his shoes off, muttering to himself, “He had his off.” A few other kids followed suit.

“Where’s the big black button?” Nick demanded, hopping up and down to get a better look. “I don’t see it!”

“Neither do we.” Brian grabbed the wiry kid and hoisted him up for a better view. Nick grabbed a wad of Brian’s hair and nimbly stood up on the bigger boy’s shoulders. He hadn’t taken off his shoes.

“I see the button!” Nick shouted, leaning dangerously to one side to look between poles. “It’s way up high! Too high, and too far from the next pole.” The kid swayed and deftly hopped down before falling. “I don’t see how anyone’s going to reach it.”

The doctor touched a finger to his glowing bracelet and his platform rose, carrying him up and away. His high laugh echoed back from somewhere near the ceiling. “Bonus points to Nicholas Arnold, for being the first person to pose the right question. And the clock is ticking.”

“Fine, go.” Brian stepped aside and let an eager eighteen-year-old shove his way in. The muscular black boy put one tennis shoe over the line and the green lights on his bracelet began to move in a swirling pattern around and around his wrist.

Dhorian hesitated for a moment, and then grabbed the line that hung off the nearest pole. He began to climb. Boys held their breath, leaning in to see what would happen. Nothing did. For a long moment everything was still, and then a shout came from above. “I made it! I’m up!”

A stampede began as boys surged across the line. Some became entangled in the foam bushes. Those turned out to be horribly sticky, and getting through them was nearly impossible. A few guys made it to poles and began to climb. Seth, Brian, and Todd waited behind the white line. “Let ‘em trigger it for us,” Todd breathed, but nothing happened.

Simultaneously, their three bracelets made warning beeps and the lights turned orange. “Aw, hell, we’re out of time!” Brian exclaimed, and waded into the foam forest with his friends. Behind them, the wall slid shut, leaving the room in sudden darkness.
* * * *
BUY YOUR COPY ON AMAZON TODAY
Connect with Courtney online:

And if that's not enticing enough, there's a Rafflecopter to enter and win an ecopy of BAIT, the secong book in the series!