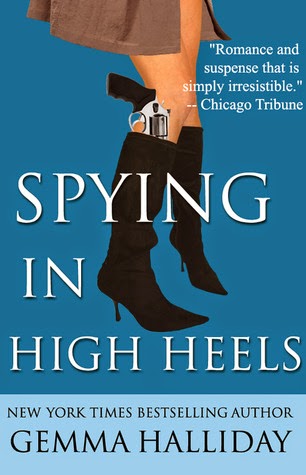 L.A. shoe designer, Maddie Springer, lives her life by three rules: Fashion. Fashion. Fashion. But when she stumbles upon the work of a brutal killer, her life takes an unexpected turn from Manolos to murder. And things only get worse when her boyfriend disappears - along with $20 million in embezzled funds - and her every move is suddenly under scrutiny by the LAPD's sexiest cop. With the help of her post-menopausal bridezilla of a mother, a 300 pound psychic and one seriously oversexed best friend, Maddie finds herself stepping out of her stilettos and onto the trail of a murderer. But can she catch a killer before the killer catches up to her...

This chic lit romantic suspense is the start of a series featuring a fast talking, label obsessed LA woman who designs shoes for a living and has a strong penchant for getting herself into trouble. Obsessively curious, Maddie Springer is fearless, or maybe just a certain degree of clueless, but totally fun to watch her get in and out of crazy situations, including those that could only happen in LA.

Parts reminded me strongly of Janet Evanovich's Stephanie Plum series, except Maddie has no private eye training or instincts. Plus, everything is about shoes, manicures, and food. She does have a hot Latino detective as her love interest and a crazy sidekick in her best friend Dana, an aerobic instructor and aspiring actress who has a "great" disguise for every situation. The dialogue is snappy, the characters engaging and the storyline kept going in unexpected directions, which is what you want from a mystery, even a chic lit flavored one.