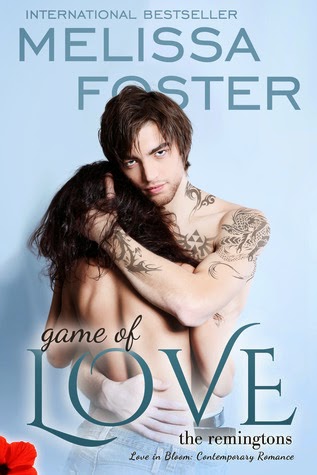 Game of Love, by Melissa Foster (Love in Bloom #10, The Remingtons #1)
Published February 2014


Ellie Parker is a master at building walls around her heart. In the twenty-five years she’s been alive, Dex Remington has been the only person who has always believed in her and been there for her. But four years earlier she came to Dex seeking comfort, and then disappeared like a thief in the night, leaving him a broken man.

Dex Remington is one of the top PC game developers in the U.S. He’s handsome, smart, and numb. So damn numb that he’s not sure he’ll ever find a reason to feel again.

A chance encounter sparks intense desires in Ellie and Dex. Desires that make her want to run—and make him want to feel. A combination of lust and fear leads these young lovers down a dangerous path. Is it possible to cross a burned bridge or are they destined to be apart forever?


MY TAKE:
This is the first book in a new series (sort of) by the prolific New York Times best selling author Melissa Foster. I've been trying to read more books by some of the authors at the top of the romance game, to see what works and how the best selling authors hook their readers. If you write romance, its good to keep up with what resonates with readers. Besides, you can't be a writer if you're not a reader first.


Foster has character development down really well, for both her main characters and the secondary figures that populate their lives. With a few quick strokes she makes them come to life in the reader's mind.

Dex Remington is a successful gamer, creator of some of the top video games in the world and owner of a gaming empire. He could have any woman he desires, but he only wants the one that got away, a friend from childhood who came back into his life briefly four years earlier. He feels like she's the only person who ever truly understood him or saw him for himself and not the millionaire he's become.

Now she's back in New York, running from a broken relationship and looking for a new job. Fate has them both in the same bar on her first night in town and all kinds of unresolved feelings get stirred up on both sides.

Ellie Parker has too many skeletons in her closet, and one of them is her unrequited love for Dex, the only bright memory she has from a troubled childhood of foster care and abuses. She's always loved him and the quiet way he makes her feel safe and cared for, but she doesn't feel worthy of his love. Dex must work to change that perception before she runs again, or before her past catches up with her.

Fast read, plenty of sexual tension and longing, and interesting alternating points of view between Dex and Ellie. Enjoyed this and understand how Melissa Foster is so well respected in the industry.