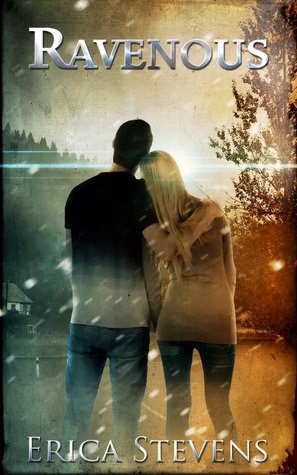 Ravenous, by Erica Stevens
Book One of the Ravening series
Published 2012

The world didn’t end with a bang, it didn’t go out in a ball of fire and fury, nor did it end in ice. But in some strange way, ice was the end; or maybe it was the beginning of something more.

Bethany is stunned and horrified when she finds herself suddenly alone in a world that was alive only moments before. Terrified, she flees into the streets of her town, looking for answers, and desperate to reach her family. Panicked, she is nearly captured by the monsters hunting her until Cade steps in to rescue her. Dark and distant, most people in school are wary of Cade, yet oddly fascinated by him. They had once been close as children, but it has been years since Bethany has had any real contact with Cade. As their situation becomes even more perilous, Bethany struggles to come to terms with her past, her terrifying new reality, and her growing love for a boy that is powerful, mysterious, and perhaps even more frightening than the aliens hunting them. Aliens that want more than their lives, they also want their blood.

Young Adult. This book contains some language, violence, and sexual situations. Recommended for ages fifteen and up.


My Take:
The book description drew me in, because the cover does nothing for me. The title seems okay, but after reading the whole freaking book, it was never put in context or explained. I get the feeling some line somewhere got cut out that would have explained more, but without it the title doesn't work for me.

And then there's the cliffhangers and unanswered questions. Not to mention the complicated backstory thrown in at odd moments and the inexplicable attraction between the two main characters.

The book starts well, quickly sucking you into the future dystopian world where seemingly benign aliens have come to earth as friends but the book starts on the day that changes. Great start! The story pulls you along at breakneck speed, and then takes odd little meandering detours to throw in backstory and context for why the characters act the way they do in certain situations. Frustrating. The author throws in hints and clues about other things that never get answered or addressed, at least not in this book. And then the ending just ends, with no resolutions to anything and one of the main characters missing in action.

Also, about halfway through the book, the author lets us know the setting is actually Cape Cod, and the characters need to walk across one of the two bridges and get to the mainland. I actually live on Cape Cod, and had no clue whatsoever as to the setting until she got to that plot point. Why did she wait so long? Up until that point, the book could've been set anywhere, from New Jersey to Minnesota to almost anywhere in the U.S.

While I read the whole book and appreciated the complicated dystopian future she outlines, I'm not going to continue this series.

Posted by Katie O'Sullivan at 2:18 PM