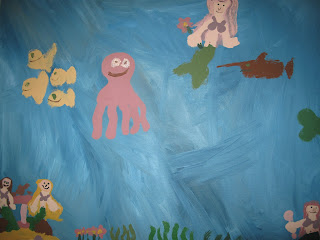 Cape Cod Weather Today: Sunny at the moment, going up to the 60s, but thunderstorms are predicted for later. Hard to believe the weatherman these days...

I spent most of yesterday obsessing over the missing Air France plane. I scrolled through the online stories on all the various news outlets, looking for concrete information. There was a whole lot of "we really don't know."

This is not the t.v. series LOST. This is not a blockbuster movie. This is real life. Planes are not supposed to disappear off the radar and leave no trace.

Why was I so obsessed? I told myself it's research for Book 2 of the mermaid series, where a plane does go down and strand the main characters on an island to await rescue. I wanted to research the various things that are known about what makes a modern plane crash, and how you go about surviving the crash.

But I kept coming back to the fact that this Air France plane went MISSING and there was NO INFORMATION for hours. Days. Maybe when Amelia Ehrhart when down that was normal, given the lack of sophisticated radar and imaging and satellites... how does it happen in 2009?

Or maybe I was subconsciously obsessing because my husband flies around in an airplane on business all the time. He's in Phoenix now, and then off to the other coast for the rest of the week. Air travel is safer than driving, but...how does a plane go missing? He didn't seem as concerned about the whole thing - but maybe that's self-preservation. Fear is paralyzing.

Today fear is paralyzing my writing efforts. Now that I'm done obsessing over the plane wreck (maybe because they have started to find debris) I'm trying to work on Book 2, and having a hard time with it. Book 1 hasn't yet hooked an agent. Is it the height of hubris for me to be working on the second book in the series if there may never be a series? Or should I trust in the Universe and keep going?

I've sent 4 new queries on the revised manuscript since participating in the Secret Agent contest over at "Miss Snark's First Victim" blog. I've already received my first rejection back. Three to go. I need to research a few more agents and send more queries to better my odds.

Research and query? Or write fresh fiction? At least I have the choice. Ah, The Joys of being a writer...
Posted by Katie O'Sullivan at 9:23 AM