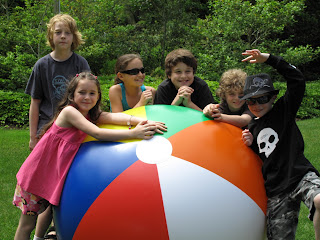 The Audacity of Planning an Outdoor Concert this Spring....

This is my son's band, NONCOMPLIANT. They're a rock band, 8 through 11-years-old. Three guitarists, a bass player, drummer, and vocalist. They play a variety of music, from the Rolling Stones and Chicago to Green Day and Paramore.

The Mode 4 Music studio's spring concert is always an outdoor affair, usually a safe bet for mid-June on the Cape. Not such a sure thing this year, however. The weather was awful all last week, and iffy all weekend. In fact, it was Pouring when we woke up in the morning. Studio owner Tony Bonelli must have been a little stressed out...

There was no rain date. There was no plan for inclement weather. There were merely the prayers of many young musicians and their families.

The venue, the Heritage Gardens and Museum in Sandwich, allowed the studio to move the whole shebang into the Carousel Museum, where there is a stage, apparently. All the equipment was moved from the outdoor stage across the map to the indoor stage. And then, somehow, the fire alarm was triggered. And they couldn't turn it off.

At this point the sun began to peek out, so they decided to schlep all the equipment back to the outdoor stage, ten minutes before the performance was scheduled to begin at 1 p.m. So the start time was pushed back. Which was a good thing, because the traffic going off-Cape was so backed up that a lot of the performers were late arriving (our carload included), having been stuck in traffic behind all the Connecticut license plates fleeing the grey day.

There were several solo performers to start the show. NonCompliant was the first band to take the stage. There were a few sound issues due to loose cables from all the transitions and inadequate time for sound checks, but the kids rocked. They were awesome, and the audience loved them. When they started off with "Play that Funky Music White Boy," the audience let out a cheer and started clapping along with the rhythm. The first song segued straight into "Are you Gonna Go My Way," another crowd pleaser. When the applause died down, the vocalist introduced the band, who then started into their version of Paramore's "Crush, Crush."

And the rain held off. And the sun came out. And Mother Nature smiled down upon these kids and teens who've all worked so hard preparing for this performance. The giant beach ball came out and a true outdoor concert experience was enjoyed.

Great job, one and all.
Posted by Katie O'Sullivan at 8:51 AM