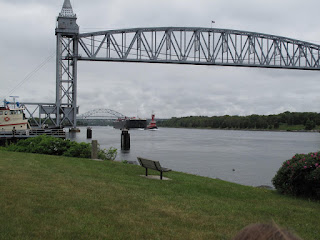 Cape Cod Weather Today: Thunderstorms. One rolled through at 5:30, another rolled through between 9 and 10 a.m. I've just turned the computer back on to sit down and write... until the rumbling starts again....

My daughter's third grade traveled to the uppermost edge of Cape Cod yesterday to learn about the Cape Cod Canal, that man-made body of water that turned the Cape into an island almost a hundred years ago. The Pilgrims first envisioned cutting a canal to join the two rivers that almost bisected the land (the Scusset and the Manomet Rivers.) August Belmont built the original canal in 1917, hoping to make a boat-load of money, no pun intended. (or maybe it was intended...) But Belmont didn't make the canal deep enough (only 25 feet) or wide enough to allow big ships to pass through easily. So they gave up and kept traveling around the tip of the Cape instead, adding 100-150 miles to their trips...

The Canal is currently run by the Army Corp of Engineers and has been since 1928 when they took it over. Our group of 8 and 9 year olds was instructed by no less than five different park ranger guys and gals, in full Ranger Rick gear including funny hats, and all of them tried to drill the same information into the kids...and seemed to get annoyed when the kids couldn't remember the numbers or dates from one lecture to the next. The canal is now 32 feet deep, except for the part that's 40 feet deep. The canal is 17 and a half miles long, but only a small portion of that cuts through land, the rest of the canal is more of a channel out through the shallow water to the deeper ocean. The canal is a little more than 500 feet wide in most places, but each Ranger gave the kids a slightly different version of the width so I don't blame them for not remembering exactly.

There were three highlights of the trip: the barge in the photo above, being towed by a tugboat. Big boat. Cool. You can see it coming under the railroad bridge, with the Bourne Bridge in the background of the picture.

The second was a family of geese who live on the bank in front of the Radar station. Even the adults took lots of pictures of the baby goslings. The kids all know the word "goslings" now, if they didn't before.

The third was the enormous amount of goose poop that was all over the entire area and the kids kept stepping in it, warning each other not to step in it, laughing at the adults who had inevitable stepped in it, and checking the bottoms of their sneakers to see if they'd stepped in it yet. There was a lot of goose poop. A lot. And it's fun to say "goose poop." Especially if you're 8.

These are third graders. This is the level of their fascination with this stuff. And the school does this trip every year. You would think the Army Corp of Engineers would gear their information to the age group a bit more, or add some pizazz somehow to make the kids interested. I thought it was kinda cool, but I'm a grown up (most of the time.)

At least there was goose poop.
Posted by Katie O'Sullivan at 10:45 AM