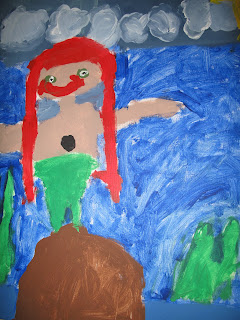 Cape Cod Weather Today: Well, the sun is still trying to rise so it's unfair to call it overcast, but I'm afraid that's the direction we're heading. Temps up into the 60 and chance of rain later, but now it's a dull grey dawn, with glimmers of pink on the horizon...

Hooray for the children's librarian at my local public library! Because of her efforts, my daughter found three (3!) new series of books she enjoyed - devoured! - over the weekend. I am now tasked with finding more-of-the-same ! Except of course that due to town budget cuts, our library was closed Sunday and again today, Monday... but tomorrow I'll be right there!

To share: The first series - and my daughter read it first in one night - was Babymouse: Queen of the World, a graphic novel by Jennifer and Matthew Holm. I had my doubts about letting her even take it out, but she loved it. Who am I to argue with success

The second two series are more traditional chapter books: Judy Moody, by Megan McDonald, and Ivy & Bean, book 5 (the only one currently on the shelf), by Annie Barrows and Sophie Blackall.

Of the three books, my daughter likes Judy Moody the best. I think it's the closest she can get to her beloved Junie B. in a more age-appropriate book. I'm okay with that, except that when I went to Borders over the weekend, the only option for buying more was to buy a rather large boxed set. I choked on the price. She can just as happily take them out of the library.

There is something special about library books, beyond the stickers on the binding and the plastic dust covers. Something about taking extra care of it because you've borrowed it. Because it belongs to that nice lady at the library who smiles a lot and runs such fun craft classes on the weekends. Because my daughter gets to have a fancy "credit" card with her signature on it that lets her use the self-checkout laser beam thingee all by herself...

I haven't read any of these books, which also feels weird to me. With my first child, I read everything before he did (does anyone else do that?) I wanted to be able to understand when he talked about what he read. I don't have the same compulsion (obsession?) anymore, and know that I won't be able to read everything to preview it for her. I have to trust.

And luckily, I have a librarian on my side!
Posted by Katie O'Sullivan at 5:29 AM