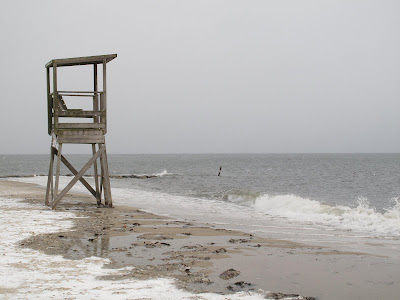 January certainly started with a roar along the East coast, bringing higher than usual tides and a flurry of weather to keep us bundled up and on the alert. On the alert for what? I'm not sure yet. 2010 has only just begun.

Since the start of the new year, I've been busy trying to prioritize my life. I seem to do this a lot, don't I? I spent a lot of time this weekend reorganizing rooms and rearranging furniture - decluttering the kids' spaces, mostly. Mine will be next, I hope.

I started work on another novel - driving home from Georgia after Christmas I had an idea for a beginning and a plot that wouldn't go away, taking Jillian on another adventure with the ghosts that haunt her. So I started writing it down yesterday. I somehow lost three hours - gone in a flash of keyboard strokes - but I have almost a whole chapter and I like it so far.

But there's that problem of prioritizing my life again. It's hard to devote time - both mentally and physically - to writing when the kids are home and the house is in chaos. I envy those who have the discipline to shut the door and just write. I'm too easily distracted. It's hard to ignore that cry for "Mo-omm...."

On a more positive note, I received my first piece of "fan mail" this week - an email from someone I don't know who said she loved my book and wished me a happy new year. I'm still a little in shock and haven't written back to her yet. I guess I should - but what to say?

I also got a phone call from a friend who finally finished reading the book. He was in the writing class with me when I started writing it - he was excited to read the ending and see what all happened to the characters. And he told me I'm a good writer. Nice praise from a fellow writer.

The month ahead is filled with visits to other places in the blogosphere - tomorrow I'm guesting on Hannah Howell's blog, next week I'm in the spotlight on Chicks of Characterization, and the last week of the month I'll be the guest for two days on Book Talk with J&J. These appearances are noted on the sidebar to the left, with links to the other blogs. I hope you'll come visit me there, and leave a comment.

The third week in January should herald the next issue of CapeWomenOnline - the Winter 2010 issue, full of lots of great articles from talented writers both familiar and fresh.

2010 is starting well, with lots of fresh things to write and fresh places to write in. Now if I can just get my daughter to keep her room organized, and get the boys to put away their clothes and shoes, I'll be all set! Happy New Year! I hope 2010 brings you everything you're hoping for.
Posted by Katie O'Sullivan at 9:14 PM