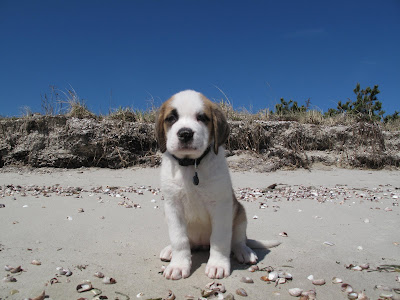 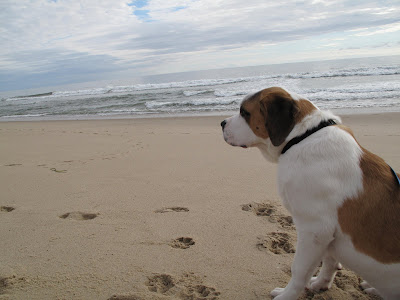 The passage of time is a wondrous thing. It can drag on forever or snap by in the blink of an eye. Children and puppies keep growing, whether time is in a slow curve or a fast spiral.

Now granted, she's big. But she won't even be 8 months old until next week. Next Monday. It's not her un-birthday quite yet. So what's the milestone? Well...

I took Big Dog to the vet yesterday for her annual physical (which, by the way, has gotten way pricey in the last few years, yowza!) Puppy loves car rides and insisted on tagging along. She waited patiently in the parking lot.

When Big Dog was done, I asked if I could bring my Puppy in for a weight check. The tech laughed a lot when she got a load of "Puppy." It took forever to get her on the scale - she refused to be bribed, so I ended up lifting her, piece by piece.

She officially weighs more than Big Dog now. Outweighs her by 10 pounds. I still had 200 pounds of dog on the leash when we left, but in my mind the balance had definitely shifted.
What's your milestone for the week?
Posted by Katie O'Sullivan at 10:17 AM