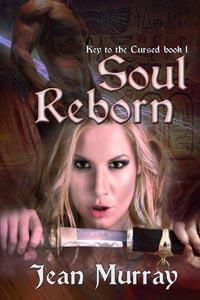 This Fourth of July holiday week is turning into my own Celebrate Crescent Moon Press week, as I share more good news from some of my new fellow authors!

Join Author Jean Murray in celebrating her 1-Year Anniversary of SOUL REBORN,
her debut paranormal romance novel.
TO CELEBRATE: Soul Reborn  from Crescent Moon Press on sale for $0.99 (original price $6.99) at All Romance eBooks for a limited time only - now through July 15th!!!
THE HUMAN REALM, HIS BATTLEFIELD.
Asar, the Egyptian God of the Underworld, has been tortured and left soulless by a malevolent goddess, relegating him to consume the very thing he was commissioned to protect. Human souls. Now an empty shell of hatred, Asar vows to kill the goddess and anyone involved in her release, but fate crosses his path with a beautiful blonde huntress who has a soul too sweet to ignore.
DEADLY SECRETS BETTER LEFT UNEARTHED.
Lilly, fearless commander of the Nehebkau huntresses, is the only thing standing in the way of the goddess' undead army unleashing hell on earth.  But Lilly has a secret—one she is willing to sell her soul to keep. If the Underworld god discovers her role in the dig that released the goddess, she will lose everything, including his heart.
I'm headed over there to buy my copy - I mean, 99 cents, right? You have 10 days to get in on this incredible deal on another great book to stuff your nook with for beach reading. Woo Hoo! Happy Anniversary, Jean!
Posted by Katie O'Sullivan at 5:00 AM