What About the Real Mermaids?

NOAA - the National Oceanic and Atmostpheric Administration - released an official statement earlier this month about mermaids. In that, they don't exist. Read the article on their website here.

But why release a statement that denies something... when most people don't believe in mermaids to start with? Doesn't that seem just a bit, well, fishy? 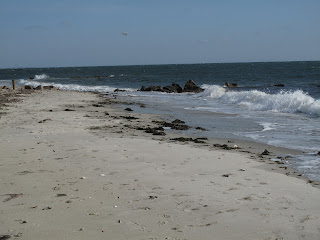 Every culture around the globe has fairy tales and stories with mermaid-like creatures. Every tale is based on some smidgeon of truth. Why is it so far-fetched to think that there might be a race of creatures adapted to life under the water just as we live on dry land? A race that didn't crawl out of the primordeal ooze, but stayed put and evolved to thrive there...

My soon-to-be-published novel (no release date yet) is a tale of mermaids and undersea wars between the clans. I live on the shores of the Atlantic, and I think there are plenty of things in the ocean we have yet to discover - but why is NOAA coming out so strongly against their existence?

Could they be real?

Could this be a coverup?

Is this Area 51 but on an oceanic scale? A Men in Black scenario of undersea aliens?

There was a recent documentary which aired on the Discovery Channel and Animal Planet, which talked about the what ifs of the existence of mermaid culture. My son saw it while at a sleepover, and a visiting friend talked about it at length on our recent fishing trip. I have yet to watch the whole thing, but have seen the YouTube clips, some of which are so patently faked...

Do you believe in Mermaids?