Cue the confetti and champage - it's time to celebrate a new release!

DEMON HUNT by Christine Ashworth is now available! Here's the cover and the blurb about the novel: 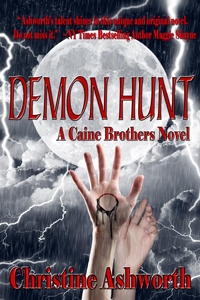 Tribred Gregor Caine decided long ago to deny his blood legacy, so he isn’t thrilled when paired with a full-blooded Fae to hunt the demons threatening to decimate Los Angeles. As they fight side by side, he finds she calls to both his Fae and his demon blood; a call he can’t resist.

Warrior Fae Serra Willows crossed into the Human Plane to help destroy the demons released from the Chaos Plane. Finding and shutting down the portal between worlds is more challenging than she expected…and Gregor and his world more seductive than she had ever imagined.
As the killings escalate, Gregor and Serra realize one of the most deadly demons from the Chaos Plane has marked Serra as his own. To save her, Gregor has to face his greatest fear—losing his humanity to the darkness in his blood. But in a race against time, that darkness could become his greatest strength. And he will kill to claim Serra’s love.

Sounds interesting, right? DEMON HUNT is available from Crescent Moon Press, or you can purchase it on Amazon.com here:
http://www.amazon.com/Demon-Hunt-Christine-Ashworth/dp/1937254739/ref=sr_1_5?s=books&ie=UTF8&qid=1342446178&sr=1-5&keywords=Demon+Hunt

At the tender age of seventeen, Christine fell in love with a man she met while dancing in a ballet company. She married the brilliant actor/dancer/painter/music man, and they now have two tall sons who are as scintillating as their parents, keeping the dinner conversation lively.

Christine's two dogs rule the outside, defending her vegetable garden from the squirrels, while a polydactyl rescue cat holds court inside the house. Everything else is in a state of flux.

You can find Christine here: