Today I'm thrilled to be part of a Cover Reveal blitz for my friend Constance Phillips! Her new upcoming novella is set in the same world as her debut novel, FAIRYPROOF (which I adored!) and has a cover by the awesomely talented Taria Reed! 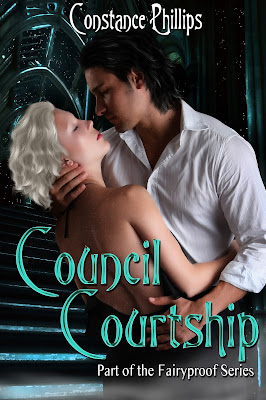 Eero might be gone, but does his revolution continue?

Tristan Ipsly knows firsthand how Eero’s ideals have ripped houses apart. More than half of his family was prosecuted for supporting the revolution, the remaining fled to the otherworld, leaving him the lone member of his house, and one of two candidates for the recently vacated Council seat. As a healer who is seated on the Repopulation Project, he has real solutions to the problems that face them all, but fears he’s been branded a traitor, not worthy of the seat. How can he even think the head of the Vettore House would allow him to court Quinn?

Quinn Vettore knows that Fairykind is dying. Eero and his revolution have left them a people divided, but she believes tradition and the Canon’s writing are equally to blame. She wants to see the Council fill the recent vacancy with someone who will be the voice of change. The prime candidate in her mind is the same choice of her heart: Tristan.

Too bad her Grandfather is the one man who stands in the way of both.

On the one year anniversary of the release of Fairyproof, Constance Phillips unveils the cover to the novella follow up, Council Courtship. Follow Tristan and Quinn, along with some familiar faces, as they deal with the aftermath of Eero’s revolution…finding love in the ashes.

Also, please visit http://wwww.constancephillips.com/blog to participate in Fairyproof’s birthday party. And yes, there will be Prizes!!!

About the Author:
Constance Phillips lives in Ohio with her husband, two ready-to-leave-the-nest children, and four canine kids. Her perfect fantasy vacation would involve hunting Dracula across Europe with her daughter, who also digs that kind of stuff. When she's not writing about fairies, shifters, vamps, and guardian angels, she's working side-by-side with her husband in their hardwood flooring business.