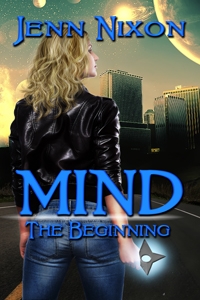 Today I'm excited to be part of a blog tour blitz for my friend and fellow author, Jenn Nixon! She's out and about in the blogosphere celebrating the release of her new novel - MIND: The Beginning. She's even given me a special excerpt to share with you all, but first, here's a little blurb about her story:

After Dina Ranger loses telepathic contact with her brother, she breaks into his apartment and stumbles onto a special government unit responsible for monitoring the psychic population. She’s offered a job where she can use her psionic gifts to help people.

Stranded on earth over a hundred years ago, Liam of Shria is searching for a metal needed to repair his ship when he finds Dina, a telepathic investigator, and narrowly saves her from an exploding alien pod. Together, they uncover a plot to rebuild an ancient weapon and discover the truth behind Dina’s abilities while unlocking dangerous secrets about the alien presence on earth. 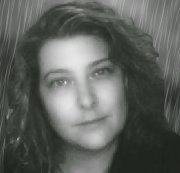 Jenn’s love of writing started the year she received her first diary and Nancy Drew novel. Throughout her teenage years, she kept a diary of her personal thoughts and feelings but graduated from Nancy Drew to other mystery suspense novels.

Jenn often adds a thriller and suspense element to anything she writes, be it Romance, Science Fiction, or Fantasy. When not writing, she spends her time reading, observing pop culture, playing with her two dogs, and working on various charitable projects in her home state of New Jersey.

One lucky commentor from each blog will win an ebook copy of Jenn’s Romantic Suspense E-Book Lucky’s Charm, one GRAND PRIZE WINNER will also receive an E-Book Copy of Lucky’s Charm and a $15 Gift Card to any online book retailer of their choice!

And if you're still with me at this point... here's that special excerpt I promised you! It'll totally leave you wanting to read more...(see purchase link above, lol) Enjoy!

Excerpt from MIND: The Beginning, by Jenn Nixon

Being near Liam was having an effect on her. Several of them, actually. His odd look appealed to her, especially those gray eyes. When she’d caught him staring at her in the living room, his irises seemed to sparkle, different from what she’d seen under the moonlight, yet equally intriguing.
Aside from his appearance, Liam pulsed with energy. She’d felt it in the Gut, even the dream. Now, with him so close, she couldn’t deny there was some force between them. If he didn’t understand it and had to run tests, there was no way in hell she’d figure it out.
Liam tilted his face toward her. “How’s the tea?”
“Good, thanks.” Shit. Dina huffed, realizing her thoughts were running rampant again. “So, Liam of…”
“Shria,” he replied. His lips went tight, probably remembering when she’d almost forced it out of him the first night they met. She hadn’t meant to tick him off then or now, so she nodded and went back to drinking her tea. When the tips of his fingers brushed her wrist, she felt a jolt, that intense connection building again. Tiny electrical charges darting under her skin. A sharing of energy. Dina drew her hand back but he captured it again. His eyes shined. “That. I know you can feel it.”
“I feel it,” she whispered, unable to meet his gaze for more than a second.
“After I teleported with you the first time, I felt it. Sitting in your car, I recuperated faster than normal when traveling such distances.” He brushed her hand and arm with his fingers. “When we are close…it’s stronger. Incredible.”
“Why is it happening?”
“I’m hoping those test will have some answers.”
She finally looked at him. “And if they don’t?”
Liam reached up, stroked the side of her face. “They will tell us something, perhaps not everything. There are aspects to my abilities with no explanation and probably some I’ve never unlocked.”
“Doesn’t that scare you?” She leaned into his hand as if it were the most natural act. He was calming despite being distracting.
“It did, when I was younger. Same for you.”
“You’re reading me now.”
“Impossible to ignore,” he said, taking her face in his hand, gazing into her eyes again. “Especially when I touch you.” He instantly broke contact and blinked. “Sorry.”
Somewhat disappointed, she kept her mind clear, and finished the last of her tea. “Well, thanks for the tea. Um…which is the spare?”
“Upstairs, third door down the hall.”
She hopped off the stool. “Right, okay. Guess I’ll see you in the morning.”
He nodded. “Sleep well, Dina.”
“You too.”
Posted by Katie O'Sullivan at 5:00 AM