Poet Kim Baker and WORD SOUP: ending hunger one poem at a time 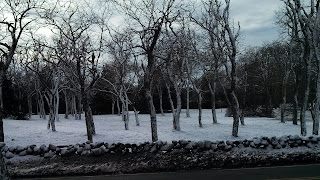 The first issue of WORD SOUP is online now, and has raised $161 so far for the Rhode Island Food Bank and the Share Our Strength program.

This new online poetry journal has a simple mission: to end hunger one poem at a time. Poet Kim Baker started soliciting submissions in May of this year for the inaugural issue, and it grew from there.

Word Soup wants to end hunger one poem at a time.  To that glorious end, we are an online poetry journal that solicits well-crafted poems on the theme of hunger.  Imagine "hunger" in all its possible meanings, from physical food deprivation to hunger for love, acceptance, actualization.  Be creative.  Then, send us three to five of your best poems.  The price of consideration is a minimum six dollar donation to a food bank.  But don't be afraid to donate more.  It won't get you better consideration, but it will endear you to our hearts and help many in need.

Submissions for the next issue of WORD SOUP, online April 2014, are now open.  Submission period will close January 15, 2014. For submission details click HERE.

About Kim Baker
When she isn’t teaching the abundant virtues of the comma at Roger Williams University School of Law, writing poetry about big hair and Elvis, and doing the Cha Cha, Kim works to end hunger and to end violence against women.
Her poems have been widely published online and in print and essays broadcast on NPR.  Three short plays have been stage-read at Culture*Park in New Bedford.  Kim’s first chapbook of poetry, Under the Influence:  Musings about Poems and Paintings, is available from Finishing Line Press at https://www.finishinglinepress.com/product_info.php?cPath=4&products_id=1606.  Kim is currently working on a book of ekphrasis poems about the stories and portrayals of women in the paintings of female artists.  Kim can be reached at bighairedpoet@gmail.com.
Posted by Katie O'Sullivan at 9:53 AM