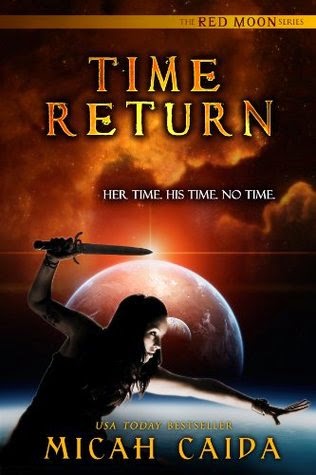 
In this coming of age debut trilogy, USA Today Micah Caida turns dystopian young adult fiction on its ear with a breathtakingly fresh science fiction, fantasy story that is as much a thriller as it is a romantic tale.

Her Time. His Time. No Time

Three teenage friends are connected by a shared secret that forces a decision with consequences no one expects. When Rayen arrives on the Red Moon sphere again, she finds shocking changes. Her arrival causes more upheaval and danger for the MystiK children, creating a heart wrenching challenge for Callan who must choose between duty and holding onto the one girl he can’t have. But walking away is harder than he expects when a new MystiK male in the sphere is poised to take Callan’s place. Under threat of attack from an unexpected enemy, Rayen and Callan must put their personal feelings aside to unite a village in chaos.

Choices backfire, trust is forfeit and alliances shift as elements of the Damian Prophecy begin to fall into place and the time of reckoning is closer than anyone expected.

This is a fun, fast-paced dystopian sci fi series, but if you haven't read the first book you need to do that first. Some series you can jump into - this one you can't. Read my review of TIME TRAP (book one) Here.

Each chapter has a specific POV and voice, with each character having a wildly different agenda and interpretation of each situation. Even our three time travelers - Rayen, Gabby and Tony - have different reasons and different goals for returning to The Sphere.

As with the first book, most of the story is from Rayen's viewpoint as she is the catalyst for the story, but this time we have additional POVs and insights, including more chapters from Callan, the love interest who draws Rayen back into this dangerous world. Most of the intricate world-building was established in Book 1, so again, you really need to start at the beginning of the series to appreciate the twists and turns and complexity.

The scenes between Rayen and Callan were frustrating at times, as they deal with the overwhelming emotions of an impossible situation. Their reactions swing between hormonal teenagers to battle-hardened adults - which seems jarring until you remind yourself this is a Lord of the Flies kind of situation, where Callan has been forced to be the adult of the group for far too long, never having a chance at dating or falling in love like a normal teen would.

The ending of this installment leaves the reader dangling on an even larger cliff than the first book. Luckily, the third book is due out this summer (hopefully!) to conclude this thrill ride.

If you like dystopian YA sci fi, you'll enjoy this series. Grab your copies of TIME TRAP and TIME RETURN soon, and then you can eagerly await the final installment with the rest of us! Each book is available on Amazon for $2.99 - well worth a trip on Micah Caida's rollercoaster.


About the Author:
Micah Caida is the melding of two voices, two personalities and two minds - one NYT bestseller and one Award-winner - which often turns up the strangest ideas. Micah enjoys exploring how different characters react and deal with similar situations. Life is often filled with the unexpected - both good and bad. While creating the Red Moon series, Micah hit upon a very unusual "what if" that exploded into an epic story filled with teenagers who face impossible odds, but are the only ones who can save the world from itself.

For more information, visit http://www.MicahCaida.com or Micah Caida on Facebook
Posted by Katie O'Sullivan at 5:00 AM