I read a lot of books at the beginning of the month (can you say procrastinate?) and was thrilled to find a post on Facebook that one of my favorite contemporary romance authors had a book on sale for $1.99...and I hadn't yet read it! As I type and schedule this post, the month is far from over, but I'm pretty sure this will still be my favorite book of the month. (and it should still be on sale if you want to check it out on AMAZON.)


~ * ~ * ~ * ~
(Before I continue with my Coffee House Review, I just want to mention that MY NEW BOOK IS OUT AS OF YESTERDAY! I know we aren't here to plug our own books but wanted to jump up and down a little cuz it's so fresh! Now back to the Book Review!)

~ * ~ * ~ * ~
I discovered Julie James a little over a year ago. My mom had one of her books on the coffee table, and since she'd already read it she sent it home with me. The next week I went to my local book store and bought two more Julie James paperbacks to read on vacation. I was hooked.

Her characters are smart and sexy. Intelligent and driven. And there's just enough legal drama and danger to draw me in. Her FBI series is my favorite, but this one was a pretty fun romp and I finished it in a day. So, fast-paced, fast reading, fun, smart, sexy... what more can you ask for in a contemporary romance? 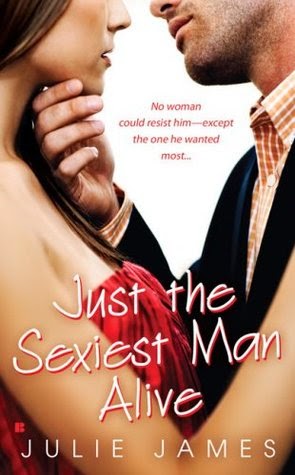 No woman could resist him—except the one he wanted most...

Nothing fazes Taylor Donovan. In the courtroom she never lets the opposition see her sweat. In her personal life, she never lets any man rattle her—not even her cheating ex-fiancé. So when she's assigned to coach People's "Sexiest Man Alive" for his role in his next big legal thriller, she refuses to fall for the Hollywood heartthrob's charms. Even if he is the Jason Andrews.

Jason Andrews is used to having women fall at his feet. When Taylor Donovan gives him the cold shoulder, he's thrown for a loop. She's unlike any other woman he's ever met: uninterested in the limelight, seemingly immune to his advances, and shockingly capable of saying no to him. She's the perfect challenge. And the more she rejects him, the more he begins to realize she may just be his perfect match

This is a fun, fast-paced romance between a smart, driven lawyer and the self-absorbed actor she must mentor for his upcoming movie role. Neither one expects the sparks that fly between them every time they're together. The chapters show us alternating points of view between Taylor and Jason, giving a kind of he said/she said quality, because their interpretations of each situation vary so wildly. Ms. James does a great job giving voice to the different characters, including a third POV from another actor trying to steal both Jason's limelight and Taylor's heart.

There's no big suspense or action, but more an internal angst between two emotionally damaged people who have a hard time believing that they might have a chance at real love. If you're looking for a fast read that will tug at your emotions, give Julie James a try. JUST THE SEXIEST MAN ALIVE was a fun read (and on sale), but my absolute favorite of her books is A LOT LIKE LOVE. She also has a new book coming out in May - IT HAPPENED ONE WEDDING - that I can't wait to check out!

Now, on to the rest of the Coffeehouse Bloghop! Have fun and visit some of these other cool sites: