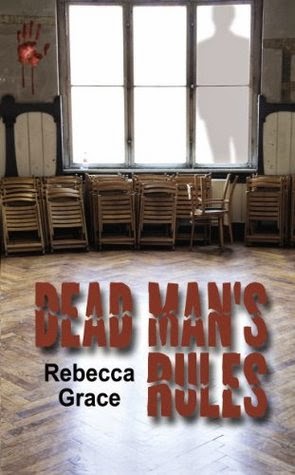 A woman on a mission, a man with secrets to hide...

When tabloid reporter Cere Medina decides to dig into the mysterious cold case death of Marco Gonzales, she hopes it will save her career. Instead, she unearths enough secrets to make a small town explode. Not to mention putting her on the wrong side of the town's fascinating sheriff.

Sheriff Rafe Tafoya doesn't need anyone digging up the past. He's come back to his hometown of Rio Rojo, New Mexico seeking peace and quiet. But Cere's arrival puts his town--and his heart--in danger.

Behind it all lurks the ghostly presence of Marco, who has everyone playing by a dead man's rules..

Dead Man's Rules is a complicated ghost story, a cowboy romance, and an intriguing mystery, rolled into one complex package.

Cere Medina is an L.A.-based broadcast journalist for "Scope,"  a locally syndicated tabloid television news program. (Think Access Hollywood, or something akin to that.) When she gets a little too close to a story, the powers that rule send her on a forced "vacation" from her job. She decides to take the unwanted time off to visit her mom, who recently retired to the small New Mexico town where she grew up.

The local sheriff is a man Cere met once, years ago when she was in town visiting her cousins. Cere had a crush on him then, and the sparks fly when they meet in the present day. All Cere wants out of this vacation is a solid story and a shot at getting her old job back - or an even better job with the network.

Sheriff Rafe Tofoya is a single dad with  big chip on his shoulder. Even though he's attracted to the fiery reporter, the secrets he holds aren't his to divulge. Especially to a woman who just wants to use them to get ahead, not caring about any consequences.

The romance works well and the small town intrigue rings true, but some of the plot twists felt too convenient and the mother's character felt hollow. Despite a few minor flaws, I enjoyed the story and it kept me reading through to the satisfying conclusion. If you like gruff cowboys with some murder and intrigue thrown into the mix, you'll enjoy this easy summer read.

About the Author:
Rebecca Grace is an award winning former broadcast journalist who writes romance, mystery and romantic suspense. She also teaches writing classes and is a writing coach and mentor. Look for her next Core class at www.SavvyAuthors.com.