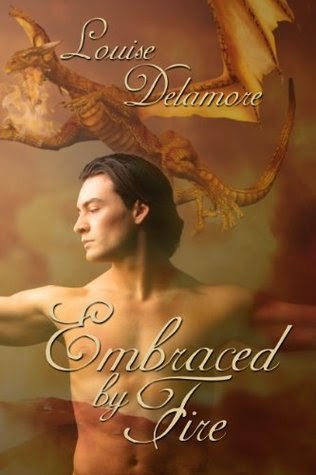 Embraced by Fire, by Louise Delamore
Published January 2014 by The Wild Rose Press


The last thing Ryu McKay needs on a mission to expose a black market information ring is a simmering attraction to his boss. Not only is he undercover, he needs to keep his shape-shifter identity a secret. Despite his desire, he dare not act on his attraction.

For Kait, excitement and that one special man exist only in her dreams. However, everything changes when Ryu walks into her office looking for a job as a fire-eater. Now she wants nothing more than to turn her dreams into reality.

Kait's attraction to Ryu grows, but can it survive the secrets he's hiding? Like the fire with which he plays, this man is dangerous.

Kait Jones is the event coordinator for Fantasia Alive, an entertainment company that supplies performers for specials events and corporate functions. She feels an instant attraction to the sizzling hot guy seeking employment, even if he looks a bit familiar.

Ryu MacKay works undercover for a secret government agency. His latest assignment makes him apply for a position at Kait's company. When he recognizes her as his crush from high school, he realizes he'll have to use his real name and do less lying than he normally would.

Kait always harbored secret fantasies about Ryu, starting in high school and ever since. Little does she suspect that he's a shape shifter, with a dragon lurking just below the surface.

This was the second paranormal dragon shifter tale I've read recently. This had a lot of action, but what really grabbed me was the sexual undercurrents that pervade every interaction between the main characters.

You expect dragons to sizzle and Ryu doesn't disappoint. Every aspect of him exudes heat, and the chemistry between Kait and Ryu works really well. In short, I enjoyed this book a lot and will definitely look for more from this author.

About the Author - in her own words:

I've held a number of jobs; working in a coffee shop, a men's clothing store, and an air-conditioner manufacturing plant. I have been a librarian, an editor, and a business analyst. However, maybe because my grip on reality is somewhat flexible, nothing I've done beats telling stories. Ever since I was a little girl I've imagined wonderful heroes and happy endings - so what better stories to tell than romances. I hope you enjoy reading them as much as I enjoyed writing them.

Want to know more about me or my books? Visit http://louise-delamore.weebly.com/