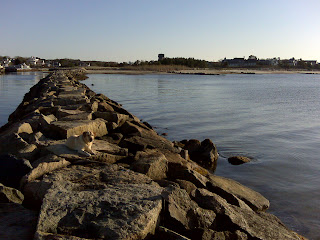 Cape Cod Weather today: Don't let the photo fool you. It's icky out there today. Heavy dense fog and misty, wet 58 degrees... hopefully clearing by this afternoon for my son's track meet.

A friend took this photo when his family was visiting last month, out on the jetty with his dog soon after sunrise. Just him and the dog. He emailed it to me, and I thought I'd share it, as I'm wishing the fog would lift and I could take the dogs to the beach without my slicker on...

This morning I had to make sandwiches for the teacher appreciation luncheon the PTA is throwing at the elementary school today. The president of the PTA cornered me at karate class a few weeks ago. I tried to offer to make something simple. Rigatoni? Green Salad? Tuna noodle casserole? These ideas were rejected, and she asked me to make roll-up sandwiches. For 20 or 30.

My daughter was in the same kindergarten class as her daughter several years ago, which was probably the last time I made curried chicken roll-up sandwiches ever. I'm not even sure she ever came to one of the parties where I served them... but that's what she requested. Whatever. My daughter got out of bed early and was eager to help me put them together. She also made little signs out of index cards to label the two types of sandwiches (some with curry and some without.) I bought a plastic platter to carry them in on, and dropped them off before ten, as requested.

Teachers deserve our appreciation for all they do, but I wasn't in the mood today. Yesterday the school lost my daughter. For twenty minutes. I mean, she was with a teacher at the time, but the office couldn't track her down and her homeroom teacher had no idea where she was. Unacceptable. I sent a note that morning, saying I'd be there at 1:30 to pick her up. I arrived a little ahead of time. Twenty minutes to track her down. Argh.

We were 14 and a half minutes late for a doctor appointment, but luckily they squeezed us in anyway (15 minutes is their cutoff, so you know for next time) because my son had the appointment after hers and then we had to go pick up oldest son from track (he called to say he'd walk to the library but we picked him up on the side of the road before he got all the way there) and drop boys home before then taking daughter to dental appointment, where they ended up charging me $6 the insurance didn't cover for her last visit in November. (Aren't they supposed to write that off?) Oldest son preceded to have a meltdown at me for most of the night and not eat his dinner... and finally apologize to me after 8 p.m. but is mad at me again today because I can't go to his away track meet because middle son has karate belt testing this afternoon, and I'll also miss next week's track meet because of Brownie camping trip Friday. Oh, and my old dog had another cranial "episode" (the vet told us emphatically that dogs don't have strokes. Even if that's what it seems like.) and has lost her balance but not yet her continence. She's almost 14 years old. Her birthday is coming up at the end of this month.

The point is, I should be writing. I should be starting something new, or sending queries for my YA. Or hounding my editor about the submission I sent her at the beginning of last month. (Okay, I can't hound her until 8 weeks is up, I promised.) But life has other plans for me, and reminds me again that my primary responsibilities at the moment are the kids in my life. Not my written babies, but the real-life ones.

Now I need to write. Before the bus gets home and the madness begins again.
Posted by Katie O'Sullivan at 10:25 AM