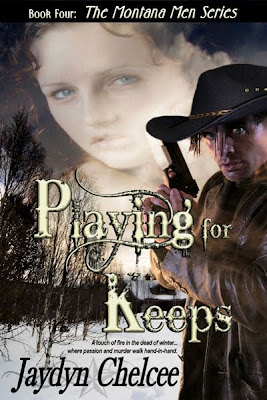 Okay, who's ready for a little heat?

Jaydyn Chelcee is my guest this week, and she's kindly agreed to post an excerpt from her upcoming western romance, PLAYING FOR KEEPS. Let me warn you, it's a good one...

EXCERPT from Playing for Keeps, by Jaydyn Chelcee

“What are you doing?” It was the first calm words the woman had spoken in hours. Her voice quivered. For the first time, he detected a hint of fear in her voice, as if she believed he’d pulled off the Interstate for nefarious reasons. Good! Let her stew.

“I have something to do,” Duel grunted.

Shit, it hurt to move. His chest and arm were killing him. What he needed was a clean motel room, a hot shower, fresh clothes that weren’t covered in dried blood as well as wet, and a few sutures.

And pain killers would be nice. Wasn’t happening anytime soon, none of it was happening.

Squinting, he studied her. “Is this it? What it?”

“Lady, you make very little sense. Just zip your mouth. I don’t even want to talk to you.”

“Aww. You’re mad because I stabbed you?” She sounded incredulous, as if he had no reason to be pissed.

“Am I mad? Horse shit. Yeah, you could say that. I’m beyond miserable, thanks to you. If you think this trip is going to be pleasant for you, you’re damned wrong. I hurt.”

“Jesus Christ. I liked you better when you weren’t yakking your head off. Shut-up, or I’ll gag you. And you should know when I hurt, I get testy.”

“You’re a man, aren’t you? Never met one yet that’s not a wuss when it comes to a little pain.”

He glared at her. “Want me to stab you and see if you like it?”

“You think you can best me in a fair fight?”

“You stabbed me,” he shot back.

“I was defending my home!”

“I was defending my body.”

She arched a brow. “Yeah, like it needs it. Where are we?”

Like it needs it? What was that supposed to mean? “No where important,” he replied testily. “And I told you to shut up.”

“Make me. Where are you taking me?”

She snorted. “Anyone ever tell you you’re an―”

She’d come around about an hour after they were cruising. At first, she’d mostly struggled to break free of the cuffs, but once she realized there was no snapping the links, she’d called him every name in the book, in between demanding her freedom, and making vile threats to his family jewels and its lone appendage.

Sure, he ignored her. Duel figured his cock and balls were safe as long as kept them out of harm’s way. He’d driven for hours now. They were a long way down the highway, a long way from her home in Virginia.

PLAYING FOR KEEPS... Coming in April from Moongypsy Press

The winner of Book One of the Montana Men series is LydiaK. Thanks to everyone who left comments!

Don't forget to come back next week for more romance to heat up your February. Next up: Sky Purington, talking about her latest release, Heart of Vesuvius.