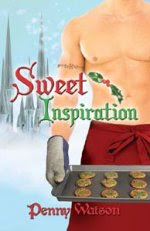 Today's treat is as sweet as a bite of sugar cookie, served with cocoa, on a cold, cold day. Like today, lol. No, really. Penny Watson has sent us a taste of her Christmas romance, SWEET INSPIRATION. I first read this book over the holidays... and can I just say, Yummmm..... !

If you enjoy this sample, click on over to The Wild Rose Press and order up the whole cookie!

And don't forget to leave a comment for a chance to win a free e-copy of Penny's book! The winner will be announced here on this blog Friday, February 18th. Good Luck and enjoy this tasty treat...

Nicholas carefully folded his coat over the back of a café chair and watched Lucy giggle with the children, as the puppy (lucky bastard) licked her face like an ice cream cone. He could barely contain his irritation.

First of all, a dog had no place in a dining establishment. What the hell was the woman thinking? Secondly, if a customer attempted a last-minute order change, Nicholas would firmly instruct him that all orders were final five days prior to the gathering. How could one efficiently run a kitchen without rules? Thirdly, and most importantly, Nicholas could smell gingerbread. Cookies. And they were burning. Lucy was oblivious. And her young assistant with the nose ring was leaning over the front counter watching the puppy, utterly clueless about the impending culinary disaster.

Nicholas tapped his foot impatiently, waiting for someone to remember the cookies. He knew by the scent that the cookies were browning, probably a bit too dark around the edges. Still waiting. Now the assistant was snuggling with the puppy, and an old man was regaling Lucy with some ridiculous story. Oh, the hell with it.

Nicholas marched into the kitchen, which was surprisingly clean, found a pair of oven mitts shaped like Laurel and Hardy, and removed the cookies from the oven. He found wire racks in a cupboard and lined them up on the counter. Although the cookies were a tad dark, they were still salvageable. Thanks to him. Using a spatula, he carefully transferred each gingerbread man to cool on the racks. He washed and dried his hands at the sink, and turned around to find Lucy and her nose-pierced assistant staring at him in disbelief.

Lucy stepped up to him, hands on her hips. “Just what do you think you’re doing in my kitchen? I don’t remember inviting you in here!” Lucy asked him incredulously.

“Yeah!” added the assistant. Clearly not the brightest bulb on the planet.

“Since you and your assistant were too busy to tend to the kitchen, and an entire order of gingerbread was about to go up in smoke, I thought I would lend a helping hand. No need to thank me.” Nicholas smiled and raised his left eyebrow in a manner his brother Sven insisted was infuriating.

“Thank you? Kandy and I are more than capable of looking after the kitchen. We do not need your help, Mr....?”

“It’s Kandy Kane, with a K, not a C. I’m a performance artist.” The young woman gave him a rather lukewarm smile.

“Fascinating.” Nicholas turned to Lucy, who looked ready to murder him. Good going, Nick, how are you supposed to seduce her now?

“I run my own kitchen up north. I assumed you wouldn’t mind a little help, since you were...momentarily distracted. Have I told you that your sugar cookies are divine? They are, truly. I was wondering if we could discuss the subtle flavor profile...”

Lucy crossed her arms, glaring at him. “Mr. Klaus, while I appreciate your concern for my cookies, I can assure you I do not need any more help in my kitchen. Why don’t you sit down with a cup of cocoa, and I’ll bring you some gingerbread cookies. Nice and dark, just the way I like them.” And then Miss Lucy Anne Brewster raised her right eyebrow in an utterly patronizing manner. Nicholas simply could not help himself. He raised his eyebrow right back. Two can play at this game.

A young man rushed into the kitchen, grabbed the performance artist and began to thrust his oddly pierced tongue into her mouth.

“Oh Kandy, can you ever forgive me? Let’s get married right now. Vegas, baby, what do you say? I want our bambino to have a daddy.” Nicholas noted that in addition to his creatively pierced face, tongue-boy also sported a nice assortment of tattoos, all of candy. Peppermints, butterscotch balls, M-and-Ms, and of course, candy canes.

“Ray, I missed you.” Miss Kane began thrusting her tongue right back at him.

Nicholas turned to Lucy. “Ray? That’s not too original.”

Lucy shrugged. “Ray, as in Ray-of-Sunshine. They’re both performance artists.” Then she turned to her assistant and tapped her on the shoulder.

“Kandy, you are forbidden to leave me right now. It’s the middle of our busiest season, and I need you. You and Ray can get married after the new year...”

“But I don’t want to wait, Miss Brewster. I love him!”

Ray licked the side of his girlfriend’s face, and both Nicholas and Lucy shuddered. “Yeah, and I got tickets for us to see Celine Dion, your favorite, honey.”

Lucy watched in disbelief as her assistant bundled up in a parka, plopped on a red Santa hat, and flew out the door with the gangly boy. Nicholas bit his tongue to keep from laughing. Served the woman right for hiring such a flake in the first place.

Leaning down close to Lucy’s ear, he whispered, “Need a new assistant? I just happen to know the perfect gentleman for the job.”