Today my guest is Kathy Mueller, whom I’ve had the pleasure of working with as she’s a contributing writer for CapeWomenOnlinemagazine. A part-time Cape resident, she’s written some wonderful articles for the magazine, including a Community Action piece in the upcoming Winter 2013 Issue, about the Eastham Dog Owners Association.

Hi Kathy, and welcome! Give us a brief bio and tell us what kind of books you like to read and write. 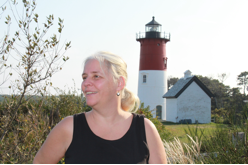 I live in central Massachusetts “farm country” most of the time, and have a second home on “my favorite place on Earth,” Cape Cod, where I try to go as often as possible. I’m in a relationship with the smartest and most handsome guy in the world, and he tolerates our three cats and three dogs!

We have always had many pets – at one point we had 28 cats on our farm! We lost our beloved Hector (dog) in 2011 and still feel the heartache every day, even though we still have his older companion, Hobie (13 next week), and we adopted TWO (that’s right, TWO) puppies last year – Charlie Brown and Cooper. Our three cats, Tux, Newman and Cali are great family members as well.

I write short non-fiction essays about dogs, cats, fibromyalgia and other topics, usually in the first-person. I am planning to publish my dog essays into a book one of these days, headlined by the longest essay I’ve ever written (no one has seen it yet) about our dog, Hector.

I read like a fiend and always have ever since I can remember. Usually, I have two books going at once. For example, right now I’m reading Steve Jobs’ biography by Isaacson, as well as a self-help book about chronic pain. My favorite books are historical novels, anything and everything by Ken Follett especially. Next in line would be biographies, and then tame murder mysteries like those by Mary Higgins Clark. I don’t like anything too violent or graphic. I visualize everything I read, and graphic stuff can keep me upset for days!

The feedback. I love to entertain people with my stories. Each day at the office, I usually gather my girls in my department together and tell them the story of the day – either something that happened with the dogs or cats, or something that happened while I was out running my morning errands. I enjoy having an audience and describing things that happen, and making them laugh. I get the same thrill when people tell me that an essay I wrote made them cry, or when they ask when is the next volume of my parents’ letters coming out.

I totally go with the flow. I will go weeks without writing because the muse is absent. Since I don’t write fiction, I don’t follow a plot. If something pops into my head, or if something happens worth writing about, I sit down and hammer it out on the keyboard. I type over 100 WPM so the fingers fly.

If you weren’t a writer, what would you be?

Well, since I am only a writer in my spare time, the answer to this question is easy!

I would be, and am, an executive with a tour company. We send teachers and their students on group tours, mostly to Europe. I’ve been in the student group tour industry for 28 years and no two days are ever the same. It is not a boring job, that’s for sure. I wear many hats, but these days my main function is bookkeeping and maintaining the customer database (addresses, phone numbers, names, etc.). A far cry from the creativity of writing!

I do get to dabble in writing some marketing prose and (more often, unfortunately) answering customer complaints! Like I said, I wear many hats at the office.

I volunteer for two non-profits, both dog-related. One is the Eastham Dog Owners’ Association where I am one of their newest board members. The other is Fairy DogParents, located on the South Shore. They assist families to prevent them from surrendering their dog to a shelter.

If I didn’t already have all of this going on, and could start with a clean slate, I would probably be a dog trainer, pet sitter, or vet tech. Something where I could handle and work with animals.

Tell us about your book!

My book is a three-volume set called MORE THAN ANYTHING IN THE WORLD. My father wrote letters to my mother during World War II and my brother and I found the letters after our mom passed away – there are over 1,000 letters from 1942-1945. There are a few letters written by my mom, but the majority are my dad’s letters to her.

My dad died when I was in my twenties. When we found the letters, I asked my brother if I could keep them because I probably wanted to do “something” with them. I had no idea that my dad was such a good writer. He was writing to an audience of one, of course, but his knack for putting the reader (his wife) right in the middle of everything that happened is superb.

I decided, instead of writing the story in my own words, I would just let the letters speak for themselves. I have dutifully re-typed every one of the letters, word-for-word. (Those typing skills sure came in handy.)

My parents signed all of their letters (even birthday cards and Valentines throughout their marriage) with the acronym “MTAITW”. It stood for “More Than Anything In The World,” and that was the obvious choice for the title of the books. I like to say that my parents invented texting, ha ha. Volumes 1 and 2 are done and available. I’m working on Volume 3, and it looks like it may actually go to 4 volumes, which I hope pleases people instead of drives them nuts!

Okay, if you're casting the movie of your books, who would play the main characters? I know it's your parents - but think Hollywood for a moment...

If I could go back to the 1940s (my favorite movie period – I’m a huge 1940s movie buff, go figure!) it would be Ernest Borgnine and Lucille Ball.  Mainly because of the physical resemblance to my parents. If it was today it would have to be Jack Black and Katherine Heigl! Although, can Katherine wear flats so that she’s shorter than Jack?

Where can readers find your books and where can they stalk find you on the web?

My books are available on Amazon, just search “More Than Anything in the World Mueller” and they’ll pop right up. They are available in print and for Kindle.

Thank you so much for being here today, Kathy!
Posted by Katie O'Sullivan at 5:00 AM

Email ThisBlogThis!Share to TwitterShare to FacebookShare to Pinterest
Labels: Guest Authors, Kathy Mueller, More Than Anything in the World