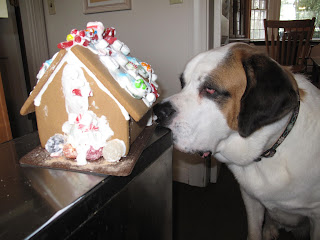 Puppy has always had a "thing" for maple syrup. She likes the sweet stuff. So when the first gingerbread man fell on the floor this December, she swooped in to eat it. I smiled and thought, "Oh, how cute."

I guess it makes sense. The sweet of the sugar combined with the tart of the molasses and the tang of the ginger - that's why people like gingerbread, right? Why not Puppy?

We have an annual tradition of holding a gingerbread house building contest between the kids during the week before Christmas. The kids all build their own, which are judged and then proudly displayed thoughout the rest of the holiday season.

Puppy has had her eye on these houses for weeks. And when I finally decided to clean up the last of the Christmas decorations, she was glued to my side. Waiting.

By now, the candy that's left is hardened and icky, the sugar icing is like cement and the gingerbread itself is dry and stale. 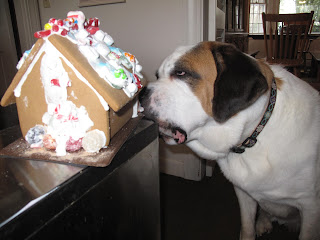 I decided to let her take a lick or two of the poor little house. I mean, it was going in the garbage anyway. She licked the peppermints. And backed away. She tried licking the gumdrop bushes. And backed away.

So I put the house into a bag to toss in the trash. A chunk of the roof broke and fell on the floor, and she swooped in and gobbled it up. A lightbulb went off in my head - aha! She just wants the gingerbread. So I broke up the walls that weren't covered in sugar and candy and gave her a small bit. Which she gobbled greedily. And then broke up the rest (removing teh offending candy and sugar cement) and put it in her treat jar.

Puppy'll be happy for the rest of the weekend with her new "biscuits."

How about you - what do you do with your gingerbread houses?
Posted by Katie O'Sullivan at 5:00 AM