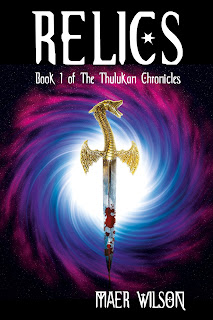 Published by Crescent Moon Press, May 2013

When the creatures of myth and magic return to Earth, they're nothing like your mother's fairy tales.

Most of Thulu and La Fi's clients are dead. Which is perfect since their detective agency caters to the supernatural. So, a job finding relics for an ancient daemon is simple. The daemon needs the relics to keep a dangerous portal closed. His enemy, Gabriel, wants the relics to open the portal and give his people access to a new feeding ground - Earth.

Hoping to create chaos, Gabriel opens portals to other worlds and the creatures of magic return to Earth, stunning humanity with their existence. When Gabriel threatens their family, Thulu and La Fi's job becomes personal. They'll need powerful allies in the race to find the relics before Gabriel does. But maybe that's what grateful dead, magical allies and daemonic clients are for.

With this well-crafted debut novel, Maer Wilson has laid the groundwork for a great new series of detective books. This refreshing take on urban fantasy has strong elements of family, love and commitment woven throughout, making it different from many of the darker novels in the category.

RELICS is the first book of a new series about a paranormal detective agency, run by two humans with unusual powers and unusual nicknames, Thulu and La Fi.

We first meet La Fi as a child, when she was still known as Fiona. Her parents die and her unusual abilities manifest themselves – she can see, hear and talk with ghosts. She meets Thulu on the first day at her new school, and the pair become inseparable. He also has an unusual talent, for finding lost things. His family – the tight knit Thulukan clan – welcomes La Fi and her grandmother into the fold with open and loving arms. The theme of strong family bonds, love and commitment run all throughout this novel.

Fast forward to the present, where La Fi and Thulu are married and running their own successful detective agency, working to bring resolution to the dead. They have a quiet, happy life but when a case brings them in contact with a Daemon, things start to get strange. When the Daemon hires them to find some relics that will prevent global disaster the action ramps up and trust me, you’ll never think of Angels versus Daemons in the same way.

The story is told all in first person by La Fi, with lots of mundane details thrown in about the food she’s preparing and the restoration work she and Thulu have done on their home. The details keep you grounded in “reality” while all manner of extraordinary creatures and events are introduced into the tale, in the same way that Charlaine Harris’s Sookie keeps us grounded in reality with her details about clothes, television shows and her tanning efforts while vampires, werewolves and the fae battle in and around Bon Temps.

The Thulukan Agency may not be the first paranormal detective agency out there on the shelves, but it is certainly one to watch. I look forward to reading many more adventures as Thulu and La Fi expand their agency.

She's always loved stories, especially fantasy, mystery and sci fi. Maer was born in the Year of the Dragon and has a dragon-themed room in her home, but sadly no dragons in the back yard. When she's not writing, Maer plays online video games, teaches college and reads. She also co-hosts the literary podcast, "MythBehaving" and writes for two gaming fansites.

She lives in the high desert of Southern Nevada with her two dogs, a chihuahua and a poodle. RELICS is her first novel and Book 1 in "The Thulukan Chronicles." RELICS releases through Crescent Moon Press on May 1, 2013.