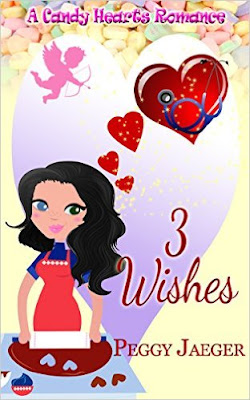 Valentine’s Day is chocolatier Chloe San Valentino’s favorite day of the year. Not only is it the busiest day in her candy shop, Caramelle de Chloe, but it’s also her birthday. Chloe’s got a birthday wish list for the perfect man she pulls out every year: he’d fall in love with her in a heartbeat, he’d be someone who cares about people, and he’d have one blue eye and one green eye, just like her. So far, Chloe’s fantasy man hasn’t materialized, despite the matchmaking efforts of her big, close-knit Italian family. But this year for her big 3-0 birthday, she just might get her three wishes.


At about five minutes of ten I was almost ready to turn the Closed sign on the door when it opened. I heard Janie’s breath hitch and turned from where I was sweeping up. Staying open late is always a risk, with the thought thieves will invade at the end of the day.
If the guy standing at the door glancing around the shop was a thief, then Dio mio, I wanted to be robbed.

About six foot, his hair was the color of a deer’s pelt, with autumnal golds and browns shot together in a glorious patchwork that grazed the collar of his jacket and curled a little at the ends. He wore a faded brown bomber jacket over a shirt I couldn’t see, but he had shoulders almost as wide as my doorway. A pair of well-worn jeans covered his mile long legs, and the fabric on the stress points at his knees was practically white.

It was at that moment he looked over at me.

His face could have been sculpted by Da Vinci or Michelangelo. A broad, smooth, forehead housed naturally arched eyebrows I knew some of my gay guy friends would have paid a fortune to have on their own faces. His cheeks were carved from marble, high, smooth and deep. And his mouth, mother-of-God, his mouth. Full, thick beautiful lips sat perfectly over a chin with a dent you could shove a button into and have it stay put.

"Sorry,” he said, those fabulous lips pulling up a little shyly at the corners. “I got stuck at work and couldn’t get here until now. I’ll be quick. Promise.”

So here’s the thing: the guy was gorgeous. But even if he’d looked like a frog with raw antipasto smothering his face, I would have dropped to my knees when he opened his mouth. Warm honey, a shot of raw whiskey, and a little hot puff of smoke wafted from his mouth like a fine and rare brandy being decanted.

This sweet, sweet romance is one of my favorite Candy Hearts stories, telling a compelling tale of how dreams really do come true.

Told in first person, this contemporary romance refers to the Aladdin story of the genie and his 3 wishes, main character Chloe San Valentino's favorite fairy tale when she was a kid. Chloe's all grown up now and owns a chocolate shop in town where she handcrafts all sorts of sweet confections, making other people's sweet dreams come true.

Her own wishes involve the man of her dreams, and have a rather specific set of qualifications: he should be a healer, he should have mismatched eyes like her own, and he would fall in love with her at first sight. The list sounded great in grammar school, but now that she's pushing 30 it sounds like a recipe for spinsterhood. Until she meets Matteo D'Amour, who fits the description to a tee. With a full cast of Italian characters straight out of a movie or the set of the Sopranos (without the goodfellas) this is a wonderful, compelling, fast paced tale that will put a smile on your face and a yearning in your heart. I'm giving it 5 candy hearts, but really with I could give it more.

Peggy Jaeger is a contemporary romance author who writes about strong women, the families who support them, and the men who can't live without them.

Her current titles, available now, include SKATER'S WALTZ and THERE'S NO PLACE LIKE HOME, and FIRST IMPRESSIONS books 1 through 3 in her 6-book The MacQuire Women Series, published by The Wild Rose Press.

Peggy holds a master's degree in Nursing Administration and first found publication with several articles she authored on Alzheimer's Disease during her time running an Alzheimer's in-patient care unit during the 1990s.