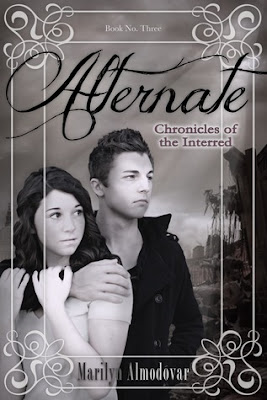 
When a portal leaves Baxter trapped and powerless in an alternate world, she finds herself on the run and fighting for her life. The world’s Council wants to hand her over to Declan, and her only source of support is a broken Alternate Jack who blames her for all he’s lost. Baxter soon realizes that if she’s going to defeat Declan and get back to her world, she’ll have to reclaim her abilities and be stronger than she ever imagined.

Declan and the Absorbers’ Initiative wage war on everyone who opposes them in their hunt for Baxter. Their actions reveal what her future will be like if she doesn’t make some drastic decisions. She knows that one misstep on her part will lead to the destruction of not just this world, but her own.

In a race against Time and bitter enemies, Baxter will discover how much is at stake and just what she’ll have to sacrifice to save those she loves. Can she learn from the fate of an alternate world how to become the Time Bender she’s meant to be?

My Take:
This third installment of this time travel fantasy starts out fast and keeps up a rocket-fast pace from start to finish. Mixing time travel, magick, sword wielding warriors, and dystopian alternate Universes, this complicated fantasy trilogy needs to be read in order.

Told in first person by Baxter, who is not merely a teenage time traveller but a Time Bender, the story starts where the last book ended: Baxter has slipped through a fissure in the fabric of time to an alternate Universe where she now sits in a jail cell in the Tower of London. In this alternate reality, her boyfriend Jack is already pushing 30 and his wife Baxter (the version of our narrator from this alternate timeline) is dead. In this world, the bad guys are already  in control. Our narrator doesn't like that one bit, and somehow rallies the good guys to fight with her one last time.

New forms of magical abilities are introduced and the fissures are finally explained, as is the narrator's  key role in this alternate reality-hopping series. The whole multiverse thing has our narrator reeling more than once as she tries to figure out how to get everything back to a semblance of normality. Poor Baxter should be in high school, not commander of a multiverse rebellion, and she does have a few breakdown moments of self pity party wallowing. She is a teenage girl, after all. In the end, she sucks it up and does what she needs to do to make things right in this Universe as well as her own.

If you like dystopian tales of intrigue and magick, give this well written and unique series a try. Like any good fantasy series, the first book starts slowly enough to introduce all the characters, but the series quickly picks up speed and barrels through to the end. I could totally see this as a BBC television series, picturing it in my head the whole time as they jump between continents and alternate universes. Kudos to the author for this imaginative and sweeping tale.

Email ThisBlogThis!Share to TwitterShare to FacebookShare to Pinterest
Labels: #99cents, #YA, Alternate, Chronicles of the Interred, dystopian YA, Marilyn Almodovar, time travel fantasy