RELEASE DAY for THE DEVIL YOU KNOW by Shawna Romkey! 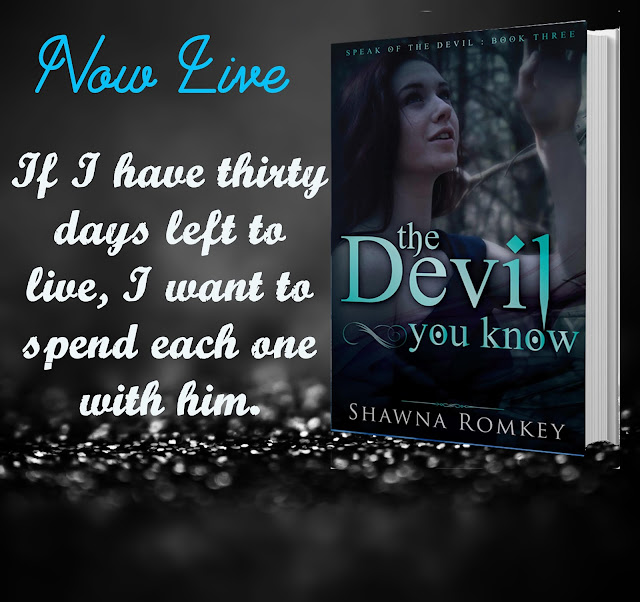 After battling her way back from Hell only to discover Luc didn't make it out, Lily must rally the angels to descend back into the Devil's domain. Now she has thirty days to rescue her angelic warrior boyfriend and break the curse to free God before Lucifer and his demon army destroy all of humanity on Earth. Forget passing the eleventh grade. Lily must face the ultimate final exam to give the Devil his due and save the world before the reapers catch up and deliver the death she cheated from them a year ago.


Purchase a copy of any of the Speak of the Devil books to be entered to win a $25 Giftcard (Open US & Internationally). Just enter the information in the link and a winner will be contacted on February 28th, 2016.

“I can’t see a thing,” Belle said, leaning forward in her seat as if that would help. But I knew how this played out because I’d been here before. I was going to hit the water again, drown again, die again. My heart raced and though I wasn’t in the water yet, I already had trouble breathing.
“Mike!” I yelled, and he reached for me as the car skidded to the edge of the bridge. Belle overcorrected and the car hit the side, bending the rail down, and over we went.
A brief instant passed. The silver sliver of the skinny moon’s reflection glinted in the black water below as we headed straight for it.
“I got ya.” Mike gripped my hand tightly. I closed my eyes and braced for impact.
All I could think was “unbelievable.” Sarcasm. My last thought before dying was sarcastic. Perfect.
Then…impact. Painful, cold, breathtaking impact. This time Mike was ready. He opened the doors easily and pulled me from the car before it filled up and dragged us down to the dredges of the Missouri River. I blacked out.
I woke up lying in the mud on the side of the river. Belle and Mike glowed green as they healed me. I didn’t see Heaven this time. I saw them hovering over me, while I coughed and choked back to consciousness.
“What the hell?” I managed to blurt out before another coughing fit took hold of me.
“We can’t walk to the church,” Belle said. “She’s freezing now.”
“We could try to take her with,” Mike said and gave her a knowing glance.
She looked at me for a second, then shrugged. “We can try.”
Mike helped me into a sitting position. “I’m going to try to take you with me the rest of the way to the church.”
“Wait. What just happened?” I asked as I became more aware.
“I don’t know. We had an accident,” he said.
“Yeah, an accident just like the one that killed us before.”

Shawna Romkey
Shawna grew up around farms in the heart of Missouri but went to the University of Kansas, was raised in the US but now lives on the ocean in Nova Scotia with her husband, two sons, an Irish wolfhound and a rescue mutt she loves to death. She’s a non-conformist who follows her heart.

She has her BA in creative writing from the University of Kansas where one of her plays was chosen by her creative writing professor to be produced locally, and two of her short stories were published in a university creative arts handbook.  She earned her MA in English from Central Missouri State University where she wrote a novel as her thesis.

She’s taught English at the university and secondary levels for close to twenty years and can’t quite fathom how all of her students have grown up, yet she’s managed to stay the same.  She’s a huge geek and fan of Xena, Buffy and all kick ass women, and loves to write stories that have strong female characters.

Email ThisBlogThis!Share to TwitterShare to FacebookShare to Pinterest
Labels: #angels, #demons, #NEWRELEASE, #YA, Shawna Romkey, Speak of the Devil, The Devil You Know