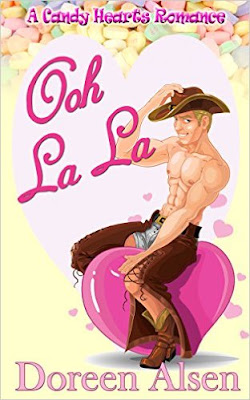 Aspiring choreographer and dance teacher, Simon West is walking along the hall in the college where he teaches when he gets knocked over by klutzy, two left feet, accounting professor Veronica Cooke. Simon wants to get to know the beautiful woman who ran him down, but how will she react when she finds out his alter-ego is a super sexy cowboy at an upscale exotic dancing male revue and that he makes ends meet by taking off his clothes?

Her eyes were a dreamy shade of blue, the greenish blue of a calm sea. Her nose was small and straight in the middle of an oval face. Pretty. Very pretty.

“Yes,” she said. “I came to apologize for running you over. Unfortunately I’m Queen of the Klutzes.”

“Okay.” He held out a hand for her to shake. “Simon West. How did you know where to find me?”

She smiled and nodded at the Barrett University Dance T-shirt he wore. “I went to the Dance Department office and asked. I’m Veronica Cooke. I hope I didn’t hurt you.”

“You didn’t. Hurt me, that is.” Since when did he babble? Since now, he guessed. He had a hard time thinking around her. He wanted to reach out and touch her cheek to see if her skin was as soft and smooth as it looked.

“Well, good. You’re a wonderful dancer. I wish I had that talent.” She glanced at her watch. “I’ve got to get to my office hours. It was nice to meet you.” She turned to leave.

He didn’t want her to. He found he very much wanted her to stay. Here. With him. “Um, do you have time to get coffee later?” He wasn’t dancing at Hardbody that night.

“Okay. I’ll see you then.” She gave him one last smile and left.

He indulged himself and watched her trundle down the hall. “I think I need to get to know you better, Veronica Cooke.”

Veronica has a button-downed life as an accountant and teacher at a local college, but when her friends drag her to a strip club, she starts fantasizing about a certain cowboy. Simon West also teaches dance at the college, but he also tends bar and dances in the all-male revue to pay the bills until he can land his dream job as choreographer to the local ballet. When the pair literally run into each other on campus, Veronica is pretty sure she's met her cowboy in the flesh, but isn't quite sure what she wants to do with him. Simon, on the other hand, has an idea or two.

While not as fast a read as many of the other books in this series, it had a unique premise and an interesting dynamic between characters. I kept feeling like the author was introducing too many characters and doing a little too much specific world building, unless she plans to expand this into a series. 4 candy hearts for this hunky cowboy stripper.


Doreen has wanted to be a writer her whole life but took a detour into being an opera singer and choral conductor. She realized that maybe she should spend more time writing when creating the back stories was more fun than actually singing them. Plus her romance lovin’ heart couldn’t take all the dead bodies littering the stage at the end of the performance. She is still an active conductor and is regularly found waving her arms around in front of singers.
Posted by Katie O'Sullivan at 5:00 AM