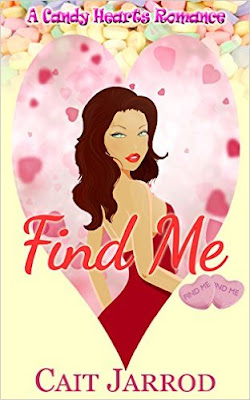 In Heather Ridge, Virginia, myth has it the lucky recipients of the two FIND ME candy hearts distributed each year are soul mates.

Too afraid of seeing her one-time trusted friend, good-hearted Lyse Haynes refuses to go to her high school class reunion. But when she receives a second invitation containing the elusive candy heart, she takes an overdue vacation to pursue the dream of finally finding her soul mate.

Ice cream creator Cooper Schmidt plans to take his product nationwide. His marketing team proposes the perfect destination for his next store. Unfortunately, it belongs to the father of the woman he’s harbored feelings for since high school. He uses her belief in myths and mails her the candy heart to entice her to Heather Ridge, in hopes she will convince her father to sell.

There’s just one problem. After ten years, his old feelings tumble forward, stronger than ever, and Lyse has a decision to make—discover who has the candy heart companion or follow her heart.

This is a sweet story with a dash of sexy, giving two people a second chance at the love they threw away before ever realizing what they had together.

Lyse and Coop were best friends growing up in West Virginia. They may not have had a lot of money, but they had each other all through high school until that fateful Valentines dance when she went with another boy because he promised to buy her dinner first. Coop said go, so she did, and they never spoke again. Now their ten year reunion forces them back together, but Coop has an ulterior motive. Or he did, until he actually sees Lyse, and all the old feelings come rushing back.

I love stories of second chances, and Cait Jarrod tells a very satisfying tale, despite some of the less believable aspects. But really, isn't this is how every single woman dreams her high school reunion will turn out? With a really great happily ever after! 4.5 candy hearts for making me smile! (But I'm still not going to my next high school reunion, lol!)