Candy Hearts Romance review: ALL MINE by Tamrie Foxtail 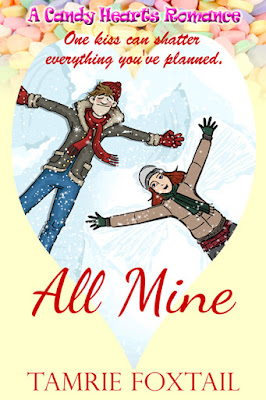 
For nearly a decade, Maggie has put the needs of her younger siblings ahead of her own. Now she’s willing to accept a marriage without passion in order to protect her brother, but fate has a wicked sense of humor. On the eve of her wedding, Maggie meets the man of her dreams.

When Shamus loses a bet, the penalty is a blind date. Shamus is prepared to endure a long, boring night; the last thing he expects is to find the woman who can bring his heart back to life.

But Maggie is keeping secrets--and her engagement is only one of them.


Excerpt:
“And we are thirty seconds from the New Year,” the TV announced.

Shamus stood in front of Maggie, drawing her to her feet.

His dark blue eyes appeared almost indigo in the soft light of the bar.

He cupped her face in his hands.

I can’t kiss him. I’m engaged.

As the old year closed and the new one began, Shamus touched his lips to hers. The noise surrounding them faded.

The warmth of his callused hands framed her face. His rum and coke flavored kiss began with a tenderness that stole the breath from her lungs. As his kiss grew in intensity, the warm swirls that had danced in her blood all night grew as well, reaching a lava hot stage within seconds.

When Maggie was fifteen, her mother told her about the first time she kissed Maggie’s father. “Once in your life,” her mother said, “there’s a kiss that shatters everything you thought you knew and changes the direction of your life.”

She understood now. Maggie pressed her fingers to her lips in a fruitless attempt to hold onto the sweetest kiss of her life. Tears strangled her heart at the realization that it was also the most bitter, since it could only mean farewell.

This Candy Hearts story is slightly different than the rest in that it begins at a New Years Eve party. The conversation hearts still have a big role to play,and this sweet romance is filled to the brim with heartfelt longing. Plus I absolutely love the cover art on this one!

Shamus loses a bet with his pushy sister and must bring a blind date to the party at her bar...except the woman ducks out and gets her big sister to fill in for her. Her big sister who's already engaged. Maggie's engagement isn't for love but for obligation, in a twist that unfolds slowly throughout the novella. She doesn't count on falling in love with Shamus. Which of course she does.

Totally sweet, this tale of miscommunication and unrequited desires tugs at the heart strings and leaves you feeling satisfied in the end that true love conquers all. 5 sweet candy hearts!