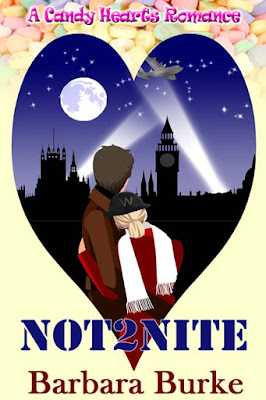 When ARP warden Molly sees a light shining through the darkness of London on a cold winter's night in the middle of the blitz she's infuriated with the careless American who struck it. Doesn't he know there's a war on?

Guy's just trying to find his way through a maze of unlit streets. He's very sorry and Molly reluctantly forgives him. When he accompanies her on her nightly rounds the two learn about each other, themselves and whether it's really possible to fall in love in only one night - especially when there's no guarantee of tomorrow.

They stood silently. Slowly her hand came out of her pocket to rest on the top of his arm. The other one reached up to gently touch his cheek. He could see the glint of her eyes, those impossible brown eyes, as she gazed up at him gravely.
“Are you going to kiss me?” Her cool British voice gave him no inclination of how she felt.
“Is that what you want?” Guy wasn’t sure what he would do if the answer was no.
She didn’t reply, and he took that for her answer. Quickly he undid the clasp on her helmet and pulled it away, letting it drop to the ground without a thought. Free of its weight, she tilted her face up, her lips dark and full in the black night, and settled more deeply into his grasp.
It was invitation enough.
He bent his head toward her.
Her lips were soft and cold. Willing, but tentative. Her arms circled his neck, and he pulled her to him more tightly, body to body despite the thick winter clothing they both wore.
The night suddenly got a lot warmer.
The kiss didn’t last long. It was too sweet to be sustained, and they were too new to the sensation to change it into something more. As soon as Guy sensed Molly withdrawing, he broke it off.
But he didn’t release her. And she made no move to pull away.
“Was that a mistake?” he asked.
“No.” Molly sounded quite sure, and Guy’s heart soared. But then she continued, “However, repeating it might be.”

Set in 1941 London, this beautifully written novella is a tale of love at first sight during wartime. The language and dialogue whisk the reader back in time, the story unfolding like a movie on the big screen. A sweet story and totally appropriate for the time period, I reveled in the light banter between the characters, set against the dark backdrop of the London Blitz.

The main character, Molly, reminds me so much of Agent Carter from the Captain America series, down to the quick witted comebacks and humor. This is not my usual choice of genres, but I loved every moment of this story and will be looking for more books by Barbara Burke.

Barbara Burke’s peripatetic life means she’s lived everywhere from a suburban house in a small town to a funky apartment in a big city, and from an architecturally designed estate deep in the forest to a cedar shack on the edge of the ocean. Everywhere she’s gone she’s been accompanied by her husband, her animals and her books. For the last fifteen years she’s worked as a freelance journalist and has won several awards. She was a fan of Jane Austen long before that lady was discovered by revisionists and zombie lovers and thinks Georgette Heyer was one of the great writers of the twentieth century. She lives by the philosophy that one should never turn down the opportunity to get on a plane no matter where it’s going, but deep down inside wishes she could travel everywhere by train.
barbaraburke@nl.rogers.com
https://www.facebook.com/Barbara-Burke-162847103814669/
Amazon.com: Barbara Burke: Books, Biography, Blog, Audiobooks, Kindle


a Rafflecopter giveaway
Posted by Katie O'Sullivan at 5:00 AM