My guest today is Kate McKeever, a fellow Crescent Moon Press author. She writes romance and paranormal romance and loves all things paranormal... and she's here to explain her obsession... take it away, Kate!

Hello, my name is Kate and I’m a trekkie, Whedonite, Whovian, and nerd extradinaire. In other words, I love other worldly fiction.

I think it all started in Kansas, with the Wizard of Oz. Don’t you love the sight of the house flying in the air, the scene of the crabby neighbor riding the bicycle in the tornado? I still remember this scene when I think of the movie. And the monkeys? Well, I liked them. Didn’t think they were scary at all.

When I was young, my interest in the other world expanded with what was called The Early Show. My mother would occasionally let my brother and I watch the afternoon movie on television. Usually there was an old movie, sometimes an adventure movie, but my brother and I always chose to watch the paranormal movies.

I remember watching ancient movies with werewolves, Frankenstein and even The Creature from the Black Lagoon. Granted, some of those movies were viewed from behind the edge of the sofa, but I loved them. As I grew, I became enamored with Star Trek, the Quantum Leap and Sliders and now, watch anything I can find from Joss Whedon and Dr. Who.

So, is it any wonder I write paranormal romance? I know, little of those shows I mentioned above had romance in them. Did I mention I also grew up on Harlequin romances?

My mother would take me to her beauty shop appointments on occasion and while I waited on her to finish getting a trim and curl, I’d rifle through the magazines and books that other customers left behind. Apparently some of them were Harlequin fans because there almost always was a romance in the stack. From an early age, I began to travel to exotic places in my imagination, meet tall, dark and handsome strangers and fall in love, over and over.

Now, I love writing about women and men who are strong, yet vulnerable.  Each of my heroes and heroines have something they have to overcome, whether it’s an enemy that they can fight or an internal weakness that has to be overcome.

My books tend to take place in our own time and our own world, but with a bit more added. Whether it’s magic or creatures that you have encountered in your dreams (both wonderful ones and nightmares) or human abilities that have become enhanced, the bottom line is that my characters have obstacles to overcome, just like we do in everyday life. It’s just that their lives are a bit more exciting than ours.

My latest book is Caden’s Fate. It’s available from Crescent Moon Press, through Amazon and Barnes and Noble and Kobo. 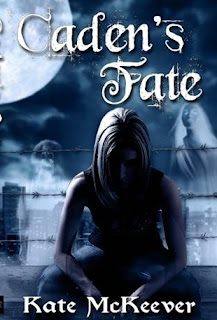 Fate Halligan is a Death Maiden, a woman who has spent her life training to help souls journey from life to the next level of existence. When her life is threatened, she must turn to a man she has been taught to view with caution.

Caden Greene is a Soldier of Light, a man who will risk his life and more to save dying souls from being stolen and used for evil by the Obsidian Guard. As a team, Caden and Fate join forces and must make decisions about not only their lives, but the future of the very world they have loyally served.

The essential Kate McKeever is a dreamer, paranormal romance writer, and voracious reader.

She started writing at a young age, like all writers, but decided to break into romance writing when she joined her local Romance Writers of America chapter. She published two sweet romances  with a New York publisher and now has turned her attention to her first love, paranormal romance.

Kate grew up in the mountains of the southern highlands. After college, several tries at different careers and a lot of soul searching, she has returned to her first passion, writing. You’ll find her in front of her computer most evenings, surrounded by her pets, a calico tabby who is convinced she is queen of the keyboard and a terrier mix whose love of rawhide bones is only surpassed by that of Kate’s  books, with ketchup! You’re also likely to find the remains of coffee and chocolate.

You can visit Kate at her website, www.kate-mckeever.com
Posted by Katie O'Sullivan at 9:56 AM