Review: DEATH LIES BETWEEN US by Jody Kessler


DEATH LIES BETWEEN US 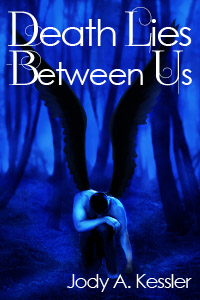 Saving the life of someone you love should not be the worst thing you have ever done, unless you are an Angel of Death.

Disgruntled with his position in the afterlife and conflicted by his feelings toward his new client, Nathaniel Evans forgoes the rules and saves nineteen-year-old Juliana Crowson from being hopelessly stuck in Forge Creek. This alters Juliana’s destiny and she finds herself in a series of near death accidents.

In the mountains of Colorado, Nathaniel comforts Juliana as she struggles to understand her paranormal abilities while coping with her brother’s drug addiction. When an ill-tempered Native American Shaman teaches her the difference between ghosts and place memories, she decides she wants nothing to do with the supernatural world. Too bad she doesn’t know that Nathaniel is part of it.

Will fate bring these two together, or has Nathaniel made the biggest mistake of his afterlife?

The bottom line: I loved this story.

The beautifully described Colorado mountain settings, the no-nonsense female protagonist, the strong family bonds, the herb lore, the Native American elements… and the fact that her guardian angel was also an Angel of Death! I mean, how cool is that?

The book begins in Nathan’s point of view, so it’s no surprise that he’s an angel, someone who was once alive but is now entrusted with helping souls cross from the land of the living over to the other side.

Although we first see Juliana from his viewpoint, the narration soon shifts back and forth between the two of them, written in dueling first person perspectives, giving the reader a better understanding of both characters, and what’s at stake.

Neither character has a full grasp of the situation, which the author allows to unfold organically, giving the reader information as the characters perceive it. With twists and turns and misunderstandings, Jules and Nathan are inexplicably and undeniably drawn together, with the reader rooting for their relationship to succeed, despite the fact that we know – we know from page one – he’s already dead.

Ms. Kessler does an excellent job of writing believable characters and beautiful scenery. The herb lore she incorporates flows naturally with the story, as does the Native American spirit mythology. The sibling bonds between Juliana and her brother are both believable and heartbreaking, and the author does an excellent job conveying the complexity of their relationship, as well as the relationship between Juliana and her grandmother.

But at its heart, DEATH LIES BETWEEN US is a love story, between two souls who are bound by fate despite the odds against them. I loved everything about the interactions between Jules and Nathan, and hope that there will be more books about them coming soon!

This book is available for purchase as an ebook or paperbackon Amazon.

Jody A. Kessler enjoys writing paranormal novels and is a member of Pikes Peak Writers. She is a yoga instructor, Reiki Master, and a graduate from the Colorado Institute of Massage Therapy. When she took an extended leave from her massage practice to stay at home with her newborn, she returned to her first true passion: writing.

She spends most of her time being a mother, writing, and teaching yoga, but also likes going to concerts, hiking, practicing herbal medicine, and reading anything that catches her interest. Jody lives in the mountains of Colorado with her family.
Posted by Katie O'Sullivan at 5:00 AM