Review: SPEAK OF THE DEVIL by Shawna Romkey 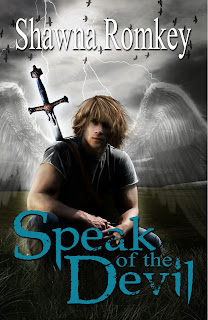 SPEAK OF THE DEVIL

When falling in love and falling from grace collide...

High school junior Lily Tyler dies along with her two best friends in a car accident, but miraculously she comes back to life several minutes later. Unable to deal with her loss and her survivor's guilt, she moves to her dad's. While there trying to heal from this tragedy and come to terms with the event, she meets some people at her new school who are all too eager to help her.

Struggling to fight her feelings for two of these strange new acquaintances, Luc and Mo, she finds out their true identities. Lily must move on from the past, reconcile her feelings for Luc, and find a way to stop a divine war with the fallen angels, all while trying to pass the eleventh grade.

This well-written debut novel features a quirky heroine who struggles with issues of self-doubt and self-discovery. Ms. Romkey does a nice job of bringing the reader into Lily’s world, and making us root for her to succeed. The narrator’s often sarcastic and self-deprecating asides will appeal to teen and adult readers alike as we watch Lily try to make sense of her world.

The story is told in first person, entirely from Lily’s point of view. She’s a typical teenager, and seems fine with being her own person, slightly on the nerdy side and happy to do her own thing, hanging out with two best friends. When their car crashes, it throws Lily’s life into a tailspin – especially as all three teens die in the crash, but somehow Lily alone comes back to life.

Angry, bewildered and feeling more than a little bit lost, she moves to her dad’s house to get away from the painful memories. At her new school, she meets a group of teens who are not what they appear, but she can’t quite put her finger on what it is that’s different about them. And there the plot thickens, with a few twists and turns thrown in for good measure. I don’t want to give anything away, as watching Lily unfold each mystery is part of the fun of the book. And it is definitely a fast, fun book.

A solid debut novel, I look forward to reading more from this author!

Shawna Romkey grew up in around farms in the heart of Missouri but went to the University of Kansas, was raised in the US but now lives on the ocean in Nova Scotia with her husband, two sons and two rescue dogs, one of which is an overgrown puppy from hell. She's a non-conformist who follows her heart.

She has her BA in creative writing from the University of Kansas where one of her plays was chosen by her creative writing professor to be produced locally, and two of her short stories were published in a university creative arts handbook. She earned her MA in English from Central Missouri State University where she wrote a novel as her thesis.

She's taught English at the university and secondary levels for close to twenty years and can't quite fathom how all of her students have grown up, yet she's managed to stay the same. She's a huge geek and fan of Xena, Buffy and all kick ass women, and loves to write stories that have strong female characters.