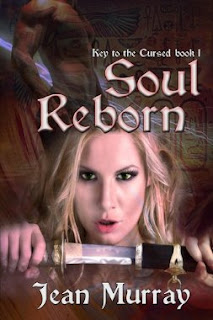 THE HUMAN REALM, HIS BATTLEFIELD.

Asar, the Egyptian God of the Underworld, has been tortured and left soulless by a malevolent goddess, relegating him to consume the very thing he was commissioned to protect. Human souls.

Lilly, fearless commander of the Nehebkau huntresses, is the only things standing in the way of the goddess' undead army unleashing hell on earth. Now an empty shell of hatred, Asar vows to kill the goddess and anyone involved in her release, but fate crosses his path with a beautiful blonde huntress who has a soul too sweet to ignore.

But Lilly has a secret-one she is willing to sell her soul to keep. If the Underworld god discovers her role in the dig that released the goddess, she will lose everything, including his heart.

I’m not sure what I was expecting, but I usually enjoy books based on mythology and fairy tales so thought I’d try SOUL REBORN. I don’t know a lot about Egyptian myths and gods, but loved Brendan Fraser’s Mummy movies and the Indiana Jones movies, so gave it a shot. I wasn’t disappointed.

Action-packed suspense, zombies roaming New York City, and sizzling romance bring ancient Egypt into the modern world. The story starts with a bang, quickly introducing the main characters and the high stakes. It’s set in the present day near future, where an archeological dig gone wrong has unleashed an evil goddess into the world, along with a plague that’s turning humans into zombies.

Lilly is the leader of the Nehebkau huntresses and the oldest of the three sisters that are central to the story. Her sister Kit fights with her and has her back as they work to destroy the undead army plaguing their world, and their youngest sister Kendra is the Egyptologist trying to figure out the answers.

Asar is the Egyptian god of the Underworld, left without a heart and soul by an evil goddess – the same one who unleashed the plague. He needs to feed on human souls – but when he meets Lilly he finds he wants more than just her soul – he wants her. The heat that sparks between these two characters surprises them both – and keeps the reader wanting more. Will Lilly and Asar be able to overcome the obstacles (and there are many as the plot keeps twisting) before them to be able to find love?

One of the things I liked best was Lilly's feisty character. She thinks for herself and does what she thinks is right, even when a god tells her not to. Defiant? Maybe. But in the end it saves them both.

The writing is crisp, the characters well-drawn and believable, and the action will keep you turning pages well past bedtime. This was a fun book to read, and I totally am looking forward to Book 2!

SOUL REBORN is available on Amazon in paperback and Kindle editions.