A to Z Blogfest: The Letter Q 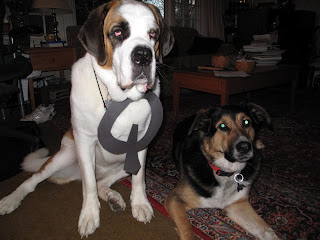 Q is for Query in any writer's alphabet, even those who pose puppies with their letters. Queries - sometimes it feels easier to write a whole novel than the four paragraphs needed to Query an agent, but it's necessary in this business. As I work with new writers, editing their work, I can gauge how "serious" they are about the submission process by whether they've heard of the word. No, really. Some of them haven't, which is okay because their work isn't "there yet" either.

I follow Query Shark to try to avoid the pitfalls of being "that" Query. If you haven't been there, the premise is that literary agent Janey Reid accepts the Queries of brave souls and rips them to shreds to show you what you've done wrong. I also find Matthew MacNish's Quintessentialy Questionable Query Experiment blog to be helpful (and pretty funny now for A to Z fest, if you haven't been there yet, go check it out!)
But I'm also in the process of Querying right now, and am going to share my own Query here. Questions, comments and suggestions are all welcome!
Query:
Dear Agent of My Dreams,

The nightmares started after the tornado devastated the Maguire’s Oklahoma farm, leaving fifteen-year-old Shea an orphan. But the bad dreams have nothing to do with twisters – it’s the ocean that haunts him. When the grandmother he’s never met arrives to take him back to Cape Cod, he needs to confront his fears and figure out what really goes on under the waves.

Kae belongs to an undersea world hidden from drylanders. A servant to the Princess, she knows the upcoming royal marriage is the only way to end the bloody war that has raged for decades. Only two things stand in the way of a lasting peace between the rival clans: the ambitions of the foreign Regent, and the rumors of a bastard child. She knows he makes her heart race, but could Shea also be the son of the Princess?

SON OF A MERMAID is a 60,000-word YA adventure set on Cape Cod and in the depths of Nantucket Sound.

I’m the editor of CapeWomenOnline magazine, living on the shores of Cape Cod with my husband, three kids and two big dogs. My publishing credits include two small press romantic suspense novels, Unfolding the Shadows and Perfect Strangers, and numerous magazine and newspaper articles.

The first ten pages follow within this email as suggested in the guidelines on your agency website (or whatever your website suggests, I'll do it!) Thanks for your time and consideration. I look forward to hearing from you.

Email ThisBlogThis!Share to TwitterShare to FacebookShare to Pinterest
Labels: A to Z blogfest, mermaid project, queries