A to Z Blogfest: The Letter E 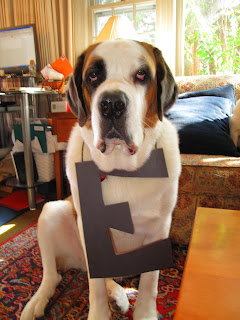 Even Puppuy knows that if you're a writer, author or Editor, the letter E has to stand for Excerpt. Right?

For those of you who have read my blog for a while, you may remember that I have a pet YA project that I keep revisiting and revising and resending... and it keeps getting rejected. This time, I've attacked it with a more objective Eye, and killed many of my darlings that just didn't fit into YA. I'm almost finished with these (final) revisions and almost ready to resend.... and thought I'd post an Excerpt from the new beginning. What follows is the first scene, where we meet the main character. I'm not sure why the formatting screwed up but bear with me. And if you do read it, I'd love to hear comments/critiques. Really.

What had started as an ordinary Thursday was quickly turning into something else. And it wasn’t even third period yet.

Tingling sensations coursed through Shea Maguire’s legs, zinging from his toes up into his stomach. It was as if some switch in his body had flipped into high gear at the same moment the school’s emergency system started its loud electronic beeping. Each beep over the monitors sent another vibration racing through his bloodstream.

Could it be just the stupid tornado drill putting him on edge?

He sat with his back against the cinderblock wall, at the very top of the gym’s bleachers, hoping desperately that no one would notice the sweat dripping from his forehead. Shea closed his eyes, as if that would make him invisible.

Logically, he knew tornados and tornado drills were simple facts of life in central Oklahoma. Plainville High’s cavernous gym had more than enough room to hold the entire student body. It wasn’t claustrophobia or nerves that had him on edge. It was something else. Something more. Almost as if there was some sort of charge in the air and Shea’s body was the magnet attracting it.

Finally, the all-clear bell rang and he heaved a sigh of relief as the tingling slowly subsided.
“Okay, people,” said Mr. Kelley, raising his voice to get the attention of the students milling next to the bleachers. “The drill’s over. Line up and head back to class.”

Shea stood, gingerly testing his legs to make sure they would make it down the stairs without an embarrassing fall. As he reached the gym floor, John Hansen spotted him and made his way to Shea’s side. John was taller than most of the other freshmen and built like a brick wall. The other students – and teachers – quickly cleared out of his way. “Hey, there you are, Maguire! Where were you hiding?”

Shea shrugged. He didn’t want to admit anything was wrong. Especially when he didn’t understand why his body was freaking out this way.

The big goofy grin lit up John’s face. “I was so saved by the bell this morning. No way was I ready for my history presentation. Western Civ has got to be my least favorite class ever.”

Just shy of six feet, Shea was considered big for a freshman, but even he felt dwarfed as he looked up at John. The pair had been friends forever, and Shea knew that even though John towered over their classmates, he was all heart. The baseball diamond was the only place John ever showed aggression in his passion to win. “Yeah, Mr. Kelley can be harsh,” he agreed. “I can never get all those dates right.”

“What are you talking about, Maguire?” John laughed, a low rumble that caused the girls in front of them to turn and giggle. “You practically ace every quiz.”

John kept laughing and shook his head. “Whatever. So… did you ask yet about Saturday? Mom said you could spend the night Friday so we can get an early start.”

Shea didn’t answer. He was distracted by another little zing crackling along his spine. He knew he’d never experienced anything like this before, but it almost felt like his body remembered the strange sensations.
“Hello, Shea?”

It took a minute before he registered John’s question.  “What? Oh, yeah, the Redhawks game. I forgot to ask.”

“Oh come on. It’s gonna be your birthday, Shea.”

“It depends on whether we get the rest of the fields planted before then. Otherwise, I’ll have to stay and help.”

“Your dad never lets you do anything fun.” They’d reached their classroom. With the overhead lights still off, the slatted blinds painted bold stripes of light along the desks closest to the windows, leaving the rest of the room in shadow. Darkness made no difference to Shea. His eyes always adjusted to whatever light was available, which came in handy when it came to early morning chores like feeding chickens or milking the cow.

John dropped his backpack next to his desk. “If I didn’t know better, I’d think your dad was trying to keep you locked away from the world.”

“Don’t be stupid.” Shea shook his head, his mouth twisted into a half grin. “Why would he do that?”

John shrugged. “Beats me. Hey, what if there really was a tornado, and it sucked away that stupid John Deere of yours?”

“Yeah, right. I’d never be so lucky.” Shea gestured toward the partially opened window next to his desk. Brilliant blue skies peeked through the blinds. “Not a storm cloud to be seen. Besides, that would just mean I’d miss the game for sure, since we’d have to go looking for a new tractor.”

The last few students entered the room and flipped on the lights. Two girls leaned up against the front row desk of Bobbie Joe Peters. Jeannie Sanderson and Maria Garcia, Shea noted. Of course the prettiest girls flirt with the richest boy in school. Shea scowled as Jeannie tossed her long red ponytail and smiled at some stupid thing B.J. said.

Jeannie glanced up, catching Shea’s stare. She leaned over to whisper in Maria’s ear. The pair both glanced his way and smiled. Shea felt his cheeks start to burn. John elbowed him in the ribs. “Dude, we’re not in middle school anymore. They’re cheerleaders now. Way out of our league.”

“Speak for yourself,” Shea said, and smiled back at the girls.

“Oh, yeah.” John snorted. “At least I play a sport. You’re not even on their radar anymore.”

“He’s rich, you’re not. And besides, it’s not like your dad would let you out on a date when he won’t even let you come to Oklahoma City with me for a baseball game.”

Up in the front, B.J. had noticed he was no longer the sole object of Jeannie’s attention. He spotted Shea and his eyes narrowed. Suddenly, B.J. pointed his nose toward the ceiling and sniffed the air. “Do you smell something?”

The girls giggled as B.J. flared his nostrils and slowly swiveled his head toward the back of the room. “Oh right, the farmboys are in this class! You should bathe more, Hansen. You too, Maguire. Eau de manure isn’t as cool as you might think.” Laughter filled the classroom. Shea clenched his teeth as his right hand curled into a fist. B.J.’s really asking for it this time, he thought as B.J.’s next words cut through him like an old fashioned scythe. “No wonder your mommy ran out on you, Maguire. She probably couldn’t stand the smell.”

Shea’s throat constricted so fast he could barely breathe as he shot to his feet, his chair slamming over sideways with a loud clatter.

“Ignore him,” John said, reaching quickly to grab his arm. The fingers dug deep into Shea’s flesh, holding him in place. “He’s an idiot.”

“He’s a bully,” Shea shot back, trying to yank his arm out of John’s grasp.

John nodded and released him. “Totally true. But he’s still not worth another detention.”