Candy Hearts Romance review: FORGET ME NOT by Maureen Bonatch 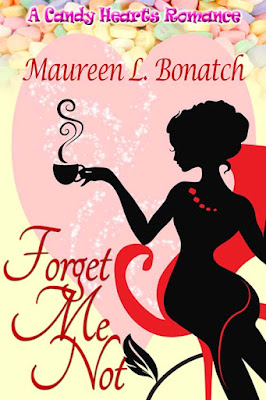 
The car accident totaled Sabrina Post’s convertible and reinvented her memories. She can't recall dumping Cole Dawson ten years ago. What her new clairvoyant visions tell Sabrina is he’s her husband. Any practical girl would question her sanity. But if Sabrina wants to make this imaginary future a reality, she'll have to regain Cole’s trust and eliminate her rival, the coffee shop waitress who’s pegged Cole as husband #4.

To prove she’s foreseen their destiny, Sabrina stirs Cole’s interest by revealing specifics about him she couldn’t have otherwise known. Unfortunately, the one detail he vividly remembers is the pain when she left him and their "rinky-dink" town in her rearview mirror.

If Cole can't believe she's a changed woman, can Sabrina accept the only second chance she has at love exists in her memories?

The boxes of candy hearts Julie forgot spilled across the floor.
Cole hunkered down and gathered the papers. His mouth formed a hard line as he glanced at Sabrina’s leave paperwork with the end date prominently circled. He replaced it on the table under the keys.
“No really, I can do it. You stay, Cole. I’ll be right back.” Sabrina caught her reflection in the mirror on the wall. The quest for a coat resulted in her hair looking as if she’d stuck her finger into an electrical outlet. Her appearance matched her desperation. She ran her hands over her head, but the static filled strands resisted smoothing.
“I need to check on Dad anyway, and it’s on my way. I’ll take Josie.” Cole extended his elbow, and Josie latched on like a lifeline, her fingers digging into the leather of his jacket. She skittered across a few of the remaining candies, crushing Be Mine and Love Me on the floor. “Thanks again for dinner, Marge.”
“Cole wait.” Despair leaked into Sabrina’s plea.
He glanced toward the papers on the table and sighed. “I waited for years, Rena. It’s you who waited too long.”
As the door closed behind him, so did the future with Cole that she’d imagined. Her shoulders fell. She knelt to collect the candy hearts scattered on the floor. Forget Me Not and Hug Me taunted her with their cheerful words. Lacking a garbage bag, she shoved a handful of the candies into her jacket pocket. Several hearts were trodden into tiny pieces, like her own.

When Sabrina sustains a head injury in a serious car wreck, she starts having visions of an alternate reality that freak her out a bit. She's having trouble distinguishing fact from fiction at first, like the fact that she never did marry her high school sweetheart.  Cole never got over her although he has moved on with his life. When Sabrina goes home to recuperate, the visions intensify, and totally show her that she should be with Cole. But how to convince him she's not crazy?

This is a fast, sweet tale with a dash of paranormal that will keep you rooting for that happily ever after right through to the end. Maureen Bonatch does a wonderful job of weaving the psychic visions into reality to make them seem so normal. I loved this well written story of second chances and hope to read more from this author very soon! 5 sweet candy hearts for this sweet story!

Maureen writes stories in the beautiful state of Pennsylvania that boast laughter, light suspense and something magical in the hope of sharing her love of finding the extraordinary in the ordinary world. She writes Paranormal Romance and Fantasy.