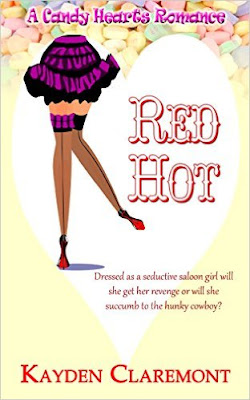 
Treena Stanton, artistic coordinator of Sierra’s Cowboy Theme Park, wants to exact revenge on Clayton Wagner. She had a crush on him in school, but he never acknowledged her existence. Revenge is sweet but not as sweet as the pleasure of his touch.

Strategic accounts manager, Clayton Wagner lost a bet and has to work the next twenty-four hours at his buddy’s theme park. But when his "boss for the day" with mouth-watering curves demands he wear a cowboy costume, all he can think about is finding out what's under her petticoat. But when the truth is revealed about their past, will the sparks of passion fizzle or burst into Red Hot flames?

Treena smiled at him. How could she not smile at that head of thick, black hair and those mahogany-colored eyes that had driven all the girls wild in school?
Clayton had been the captain of the football team and Treena had been–well, totally invisible to him.
She stood, straightened her shoulders to make her C-cups seem bigger, moved her hand down her navy skirt to accentuate her hips, and pointed to the costume. “No. I’m not kidding.” She took a step closer, tucking her long, red hair behind her ear as his spicy aftershave enticed her. “You applied for a job at Sierra’s Cowboy Theme Park and you’re confused about working as a character?” Darting her tongue across her bottom lip, she waited for her words to pierce his pride. “What kind of work did you think you’d be doing here?”
He tensed, as every fiber in his masculine body screamed not this. Satisfaction danced deep inside her. Even in his Italian suit, she could see that he was still athletic, with muscular arms and thighs. Clay still made her pulse race.
By the way he looked at her, she could tell she still had no effect on him at all. He stood inches away from her, looking her right in the eye, and hadn’t recognized her. Should she wave? Chant the school’s victory song?

Now a well-respected  manager of a western theme park, Treena is excited for the chance for revenge on the boy from high school who ignored her. She wants to humiliate and tease him, leaving him longing for more. Unfortunately, she still harbors a crush on the guy and revenge isn't as sweet as she envisioned.

Clayton lost a bet to a friend and ended up working as a cowboy at the theme park for the day, never expecting the feisty woman dressed as a saloon girl to stir up all kinds of fantasies. He wants more - hell, he wants it all - and is determined to win Treena over.

You wouldn't expect a story titled Red Hot to be anything less than sizzling, and this novella delivers sexy, sensual scenarios to warm those cold winter night.

She hopes you enjoy her other books, Hell’s Bounty and Timeless Passion, all published by The Wild Rose Press.