Candy Hearts Romance reviews: YOU & ME by Stephanie Kepke 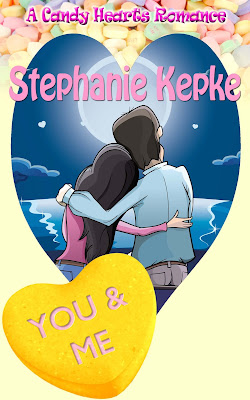 Forty year old Alex Spencer has given up on love. Having escaped five years earlier from the verbally abusive and two decades older, Trent Peterson, her life revolves around her daughter, sixteen-year-old Josie, even if Josie wants nothing to do with her.

But with Valentine’s Day looming, Alex’s high school sweetheart, Billy Leibowitz, whom she kicked out of her life twenty years earlier thanks to Trent’s demands, has been invading her thoughts. Alex searches for Billy in vain—it seems as if he’s simply disappeared. Suddenly, Candy Hearts, which Billy sent to Alex every Valentine’s Day, start arriving in the mail. Is Billy sending the Candy Hearts? Will this finally be her chance at happily ever after?


She belonged in blossom pink or cerulean blue, sage green mixed with crisp white. But, all she wore was black or occasionally charcoal gray. On my single mom budget, I bought her skinny jeans at Target and cute cotton tops at Kohl’s. Still, she wore her baggy sweatpants and that black hoodie that hid her figure. Not that I wanted her to flaunt it, but I wanted her to own her beauty. Her glossy, raven hair was kept in a messy topknot at all times. Her stormy gray eyes, just like her father’s, almost blue, but not quite, were ringed in thick black liner. She was hiding. Better not to be noticed.

I was the complete opposite at sixteen. I wore tight, faded jeans: bleached and frayed, the denim almost white; and fuzzy angora sweaters that hugged my curves. My hair was in wild curls, just as inky black as Josie’s, but never pulled into a bun. The higher my curls were, the better and I went through a bottle of hair spray a month. I may have hit my peak back then.

My boyfriend, Billy, was crazy about me and we were kind of like a verse in a song, a song about longing and perfect love and innocence. We dated from the time we were fifteen until we were almost twenty. We were born three days apart and as we planned our yearly joint birthday party on the beach, I suddenly felt suffocated. I had celebrated my birthday the same way with the same people for four birthdays in a row and I just couldn’t do a fifth. I needed to break away and see what else was out in the world. But, I always wished I didn’t break Billy’s heart in the process. The song ended as I turned out of the parking lot and left me wondering what ever happened to Billy Leibowitz.

My Take:
Sweet with just a touch of heat, this first person novella tells a wonderful story of second chances. The narrator has given up on love, having thrown away the one friend she could always count on for an abusive relationship with a man two decades older. Now forty, she escaped the abuser and brought her sullen teen daughter back home to Long Island to start over. Rekindling old friendships takes time, but she's never forgotten her first love and best friend. Unfortunately, he seems to have fallen off the face of the earth, until a box of candy hearts arrives in her mailbox.

Stephanie Kepke does an insightful job at showing how even a strong, smart woman can end up in an abusive relationship, and how hard it is to get out and start over. She paints a hopeful picture of second chances and leaves the reader smiling at the twists in the story. I enjoyed this fun story that leaves the reader with a satisfied smile, and give it 4.5 candy hearts,

An award winning writer and blogger, Stephanie's second grade teacher told her she should be a writer and she hasn't wavered in her path since. In her past life - before kids - Stephanie was an arts reporter and music journalist. She spent her twenties listening to loud rock bands (including her drummer husband's) in bars all around Boston and New England. She lives in New York on Long Island with her husband, three boys and two slightly crazy rescue dogs (one of whom is three-legged). She lives in between the Atlantic Ocean and the Long Island Sound and loves to keep her toes in the sand.