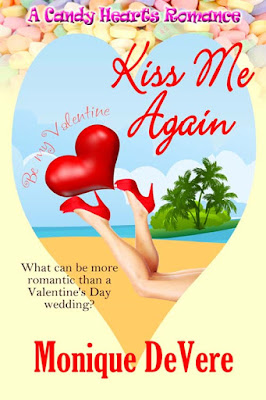 
What can be more romantic than a Valentine’s Day wedding?

A Valentine’s Day wedding on a Caribbean beach!

The last thing Riley Flynn wants is to be present at her ex-fiancé’s wedding—which should have been hers—but she refuses to give him the satisfaction, despite the nosedive her life has recently taken. Now, if she can only find a plus one to prove she isn’t a complete failure.

All Sam Rutherford wants is a peaceful life, but his zany neighbor is making it impossible. The woman is a menace to herself, and anyone in her path—he has the dent in his car to prove it. But when she raises those big amber eyes and confides in him, how can he say no to anything she wants? Soon she’s invading his life and bungling her way... into his heart.


“I’d have to kiss you first before I can kiss you again.” The low intimate timbre of his tone sent a prickle over her, tightened her skin.

To disguise the sudden wired sensation in the pit of her stomach, Riley popped the sweet into her mouth, smiled then shrugged. “Well, there’s that.”

Even from the distance of his desk that separated them, Riley noticed the way his gaze dipped to her mouth then darkened as she crunched the chalky sweet.

“C’mere.” His voice, richer, darker, and sexier caressed her.

Riley gulped against the tension constricting her throat; her heart pounded in anticipation as she swallowed the chewed candy. “I don’t think that would be wise, Sam.”

“Why? Do you need me to look at something in that file you were reading?” She kept a playful smile in place as she thought of a way to ease out of yet another potentially awkward moment she’d created with Sam. She was pretty sure she’d make a fool of herself if she closed the space between them.

“Riley.” Her insides liquefied whenever he said her name with such command. “Come here.” With that rusty edge to his usually smooth voice, she couldn’t help but obey.

She slowly pushed to her feet and, on shaky legs, she moved around the desk toward him. “Sam?”

He stood, closed the remaining space between them. “Say my name again.”

“Sam...” This time it came out breathy and needy.

Kiss Me Again is set on an island in the Caribbean  but isn't a vacation on the beach romance. It tells the story of two transplants who arrived on Nevis for different reasons, klutzy Riley following a fiancé who cheated on her and button-down lawyer Sam starting his career over after scandal in New York. When she backs into his sports car the day after losing her job, Riley breaks down and Sam will agree to anything to stop the flow of tears. Even being her date at her ex-fiance's upcoming beach wedding.

Fast paced and fun, this tumultuous roller coaster of miscommunication and hot innuendo will keep you turning pages to the satisfying conclusion. This Candy Heart novella is a fun piece of brain candy, sweet, sexy and satisfying.


Monique DeVere is a full-time author of Sweet 'n' Spicy Romantic Comedy and Contemporary Romance. She also writes Christian Supernatural Suspense movie scripts. She was born on the beautiful island of Barbados, where she grew up on a large plantation with enough wide-open space to let the imagination run free. She moved to the UK as a teen and shortly after met and fell instantly, and irrevocably, in love with her very own strong-silent-type hero. When Monique isn’t writing or spending quality time with her family, she likes to armchair travel to distant and exciting parts of the world and considers herself to have the best job on earth.


a Rafflecopter giveaway
Posted by Katie O'Sullivan at 5:00 AM