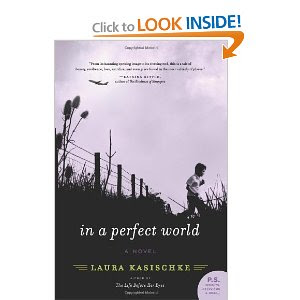 This week - despite the A to Z blogfest challenge I'm participating in - I managed to finish a whole novel, IN A PERFECT WORLD, by Laura Kasischke. Short summary: Loved the book. Loved the story line. Loved the lyrical writing. Hated the ending.

Jiselle McKnight is a flight attendant, and lands what everyone says is the catch of the year - Mark Dorn, the handsome, charming pilot whom everyone swoons over has chosen her to be his new wife. And stepmother to his three children. Who have gone through five or so nannies in the last two years since his wife died.

The book begins a month after Jiselle has quit her job and moved to the perfect little suburban town outside of Chicago where Mark's family lives. A bedroom community where no one really "lives" - except Jiselle, who spends those early days pining for Mark's return, his down-time in between flights. We see flashbacks fo their courtship, her decision to marry him, her mother's bitterness...

There are apparently at least two foreign wars going on and a flu epidemic brewing, but Jiselle is caught up in her own life, like so many of us. The book is told in fits and starts, flashbacks and forwards, but doesn't feel disjointed as much as a stream of consciousness kind of tale, where you hang on every word and wait for the author to loop back around to close a certain storyline. By the end of the book, the "Phoenix flu" epidemic has spread to epic proportions.

It's an end-of-the-world fairy tale told matter-of-factly with present day references and cynicism, as well as a wonderfully lyric and romantic tone. It's the story of a woman who finally finds love and happiness - but it's not what she'd always imagined.

I don't want to give too much away - I really do recommend this book for so many reasons, despite the fact that I didn't like the ending. But that's me - I like the HEA. That's why I write romantic suspense instead of plain suspense or apocalyptic contemporary fiction. The author describes herself in the end notes as "a poet. I'm a lot more interested in the things around a character - her time, her place, her physical experiences - than I am in thinking about whether she's a noble person or an evil person, or even a believable person."

The characters are all too believable, as are the situations and scenarios. A book I would definitely recommend... with that caveat that there's no Happily Ever After to be found.