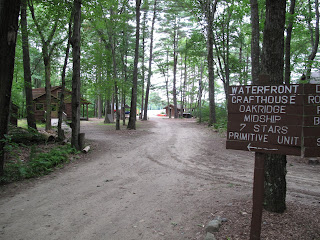 Cape Cod Weather today: Sticky, hot and humid, chance of a thunderstorm later today. Can you say "dog days of summer" ? They're here!

I'm spending a lot of time wondering what my daughter is doing at summer camp. Hoping she's having fun and making friends.

I'm also spending a lot of time reminiscing in my own head about my days at Girl Scout camp, way back when. I grew up in Northern New Jersey, and our council's camps were across the border in rural New York State. Camp Golden Knot was were I went as a Brownie, and Camp Glen Spey was were I went when I was a little older.

My sister and I always went to camp in August, since our family spent July down the shore in Normandy Beach, on Barnagate Bay. The Jersey Shore is a fabulous place to spend summers, almost as nice as Cape Cod (LOL). Sandy beaches, early morning sailing lessons, day camp on the bayside, water skiing behind dad's boat, visits to the boardwalks in Point Pleasant and Seaside Heights on weekends. Stock car races in Wall once a summer.

After a month at the shore, camp always seemed extra-green, the tall trees perpetually casting shade and shadows. The lake was so different from the Atlantic, in so many ways. The all-girl atmosphere, hiking, crafting, swimming, row boating, and the daily challenges the counselors would throw at us made Girl Scout camp one of the highlights of my summer and my year, every year. I met a great group of girls from all over New Jersey, and we'd plan to sign up for the same session each year, the only two weeks most of us would see each other since we went to different schools.

On my last summer camping at Glen Spey, my now teen-aged camp friends and I decided to sign up for the Primitive Camping experience, not really knowing what we were signing up for, just that it would be more challenging than previous summers. We wanted something special for what we agreed would be our last summer as Girl Scouts together.

On arrival day, we Primitive Unit campers followed our counselors on a long hike, carrying all our gear, at least a mile "out" of camp. It must have still been part of Glen Spey, but we'd never been to this neck of the woods. They led us to an empty clearing.

"This is your campsite," they told us. We looked around. Nothing. No tents, no fire pit...no latrine. "Your sleeping units were delivered, so we won't have to carry them the whole way from camp." We followed the counselors up another path through the woods, that spilled onto a dirt camp road. On the side of the road were long, heavy boxes with pictures of tepees on the sides.

We read the instructions, and built tepees. They were large enough to sleep 4 or 5 girls, but we were a little cramped inside the space. We were told that was okay, because we were going to be too busy to spend much time inside except to sleep. The counselors were right.

We gathered large stones and built a fire pit. We dug a pit and lashed saplings between trees to build a latrine. We found a spot next to a rocky outcropping where we could rig up a bucket high enough to build a shower (which we didn't get fully functional until almost the last day.) We rigged our food on pulleys in the trees to keep the critters out. We put on war paint and raided other campsites (only counselor tents) for extra food and treats (looking back, I think that might have been prearranged between the counselors.) We hiked back into the main camp and swam in the lake a lot, but our primitive unit was still nicknamed PU, because, yes, we all smelled pretty bad after a week in the woods.

For two weeks, we kept building and improving until our campsite was just as fully functional as any of the "regular" campsites at Glen Spey. And then we had to take it all down at the end, to Leave No Trace. It was the best two weeks at camp I ever had.

My daughter is eight. She is not primitive camping this summer, but someday, maybe, she'll want to do something similar. One of the camp choices she looked at for this year was "Camp Survivor," based on the popular t.v. reality show. She decided she wasn't ready for that quite yet. "Maybe next year," she said.