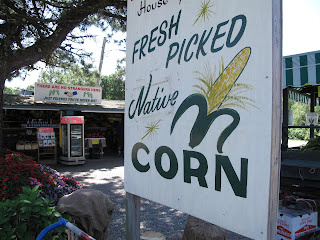 Do you think about where your food comes from? When you walk through the produce aisle of the supermarket, do you ever wonder about the farm where it grew? Or at least, what country it came from? Or do you buy all your produce from farm stands, like this one up the street from my home on Cape Cod?

My sister works on an organic farm in northern Vermont. She's the farm manager, and has been for the last four years. Valley Dream Farm is part of the Deep Root Farm Collective, which means that a bunch of small organic farms have banded together to sell their produce into the big stores, as if they were a big company-type farm.

Today the kids and I went to help pick parsley for an order that may end up at a Whole Foods Store near you. I'm not sure I'll ever be able to look at parsley quite the same again after spending three hours bent over the farm rows picking bunches in the rain and trying to help my son figure out how to work the wet and slippery twist ties (a really bright kid, he just couldn't grasp the concept. go figure.)

The parsley we bunched was fresh, big, bushy and green. Beautiful. Fragrant. My hands still smell of fresh parsley as I type this. But the kids and I (and my sister and the farmhands) were soaked to the bone in the rain. Cold rain dripping down my face into my eyes as I searched for more curly stems ready to bunch. The stuff had to get picked and bunched and boxed before the Deep Root sales guy got there with the truck, so rain or no it had to get done this morning.

When I'm in the supermarket, I just don't think about that stuff. Like who picked the veggies. Whether it was raining, or the farm worker's girlfriend had just left him after ten years, or whether it was someone's birthday but they had to get the order filled before they could go celebrate.

If we thought more about where our food has been and where it comes from, maybe we wouldn't mind paying that extra fifty cents or dollar for the organic, hand-picked veggies that don't come from a factory farm and aren't picked by migrant workers or illegal aliens who aren't being paid enough to live on. When I return home, I know I'll pause in the produce aisle and try to picture the farm and farmers who grew my food.

And hope they keep up the good work, even in the rain.
Posted by Katie O'Sullivan at 1:50 PM