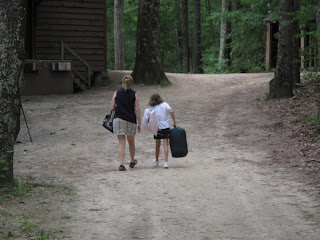 My daughter came home from Girl Scout camp, in one piece and all smiles.
She talked non-stop for the first two and a half hours in the car, in the stop-and-start traffic of a busy Friday evening. And then talked her way through an hour of dinner at a Chinese restaurant on Route 20, where they stopped to wait out the worst of the traffic. And she polished off an inordinate amount of hot and sour soup, lo mein and general gao's chicken.. and then decided to nap for the rest of the trip home.

I missed all of that, as my eldest had the final tournament of his summer basketball league at the exact same time as camp pickup. My husband and I flipped a coin, and he won camp pickup and I won basketball tournament. My son won in the semis, and we went out to dinner at Dairy Queen with some of his teammates and some of the losing team members... and then headed back to the gym for the finals.

It was a close and hard-fought game, and my son fouled out early in the second half. The refs let him back into the game when one of his teammates injured his knee and had to sit out with an ice pack. Our team had only 6 members for a 5-man game, so the bench wasn't very deep. The opposing team had at least 4 extra players, and voiced a strategy of purposely fouling my son out. Then they focused on the next guy.

It was a long day all around.

But my daughter is home again, and life is back to normal.
Posted by Katie O'Sullivan at 8:38 AM